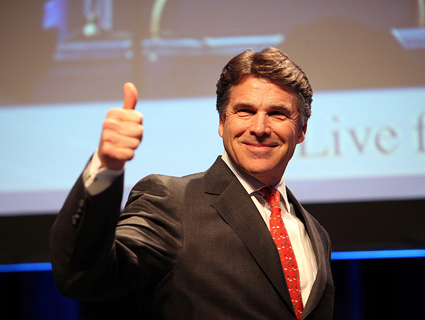 Texas Governor Rick Perry has a plan to bring down unemployment, pay off the national debt, stop natural disasters, and smoke the terrorists out of their spider holes: He’s hosting a prayer summit. The possible GOP presidential candidate has invited the nation’s other 49 governors to join him at Houston’s Reliant Stadium in early August for “The Response,” a day of non-denominational Christian prayer and fasting (the latter is recommended but non-compulsory). Per the official site:

As a nation, we must come together, call upon Jesus to guide us through unprecedented struggles, and thank Him for the blessings of freedom we so richly enjoy according to His grace, mercy, and kindness towards us. A historic crisis facing our nation and threatening our future demands a historic response from the church. We must, as a people, return to the faith and hope of our fathers. The ancient paths of great men were blazed in prayer – the humility of the truly great men of history was revealed in their recognition of the power and might of Jesus to save all who call on His great name.

“There is hope for America,” the site explains. “It lies in heaven, and we will find it on our knees.”

This shouldn’t come as too much of a surprise from Perry, who just six weeks ago issued a proclamation calling on residents to pray for rain for 72 hours, in response to historic wildfires. It’s also similar in nature to the Texas Restoration Project, his 2006 outreach effort to pastors like Rod Parsley, the Ohio evangelist who has said Islam must be destroyed. The Houston event is being funded by the American Family Association, a conservative Christian organization that’s been classified as a “hate group” by the Southern Poverty Law Center for its incessant promotion of false, anti-gay propaganda.

The AFA’s issues director, Bryan Fischer, has alleged that gays caused the Holocaust—and are planning on doing it again; that gays should be banned from holding public office; that homosexuality should be criminalized; that foreign Muslims should either be exterminated converted to Christianity or subjected to lethal force*; that American Muslims should be deported; that there should be a permanent ban on mosque construction in the United States; and that Muslims should be prohibited from serving in the armed forces.

This all sounds pretty extreme (and it is pretty extreme), but it’s worth noting that Rick Perry believes some of that stuff too. He has repeatedly asserted, for instance, that Texas’ homosexual conduct statute, which criminalized gay sex, was a good law that should not have overturned by the Supreme Court.

*Note: After re-reading the offending quote, Fischer is more vague about how this will work, so I’ve tone down the language a bit.