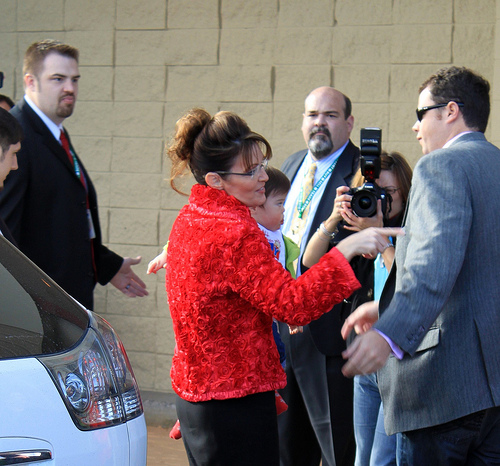 Sarah Palin may now dismiss global warming as a “bunch of snake oil science,” but just a few years ago, back when she was governor of the state melting into the sea, she was inclined to care about the subject. It’s well-known that she established a task force to address climate change in the state, but later flip-flopped on the issue. Yet as one exchange in the trove of emails released by the state of Alaska last week shows, Palin at one point actually took climate science quite seriously.

In an email exchange from July 2007, Palin discussed global warming with her brother, Chuck Heath Jr., who was taking part in a climate change study program for science teachers at the University of Alaska Fairbanks, and the state’s environment commissioner. Heath wrote:

Sarah, I’m just about done with my 80 hour course on global climate change. Most of it has been focused on coastal erosion which is probably a bigger deal than you’re aware of … I have met some of the top scientists in the world on the subject and if you’d like, I can organize another advisory task force (which would include scientists, economists, citizens who live in these areas) who can give recommendations to the state. The problem is accelerating quickly so it would be good to get a handle on it now.

Palin forwarded the message to Lawrence Hartig, the commissioner of the Alaska Department of Environmental Conservation. She mentioned her hope that the state is “really getting serious about dealing with climate change impacts.” She added: “I’m getting more and more enthused about digging into the subject and working on it.”

None of this is to say that Palin’s administration was all that progressive when it came to climate change policy. She created the climate task force but then ignored its recommendations. Her administration also sued the federal government for listing the polar bear as threatened under the Endangered Species Act, due to the impacts of global warming.

What’s most interesting is that Republicans—particularly the GOP’s presidential contenders, declared and otherwise—have widely been written off as anti-science by their foes on the left. It’s little wonder, with Michele Bachmann arguing that carbon dioxide is nothing more than plant food and Rick Santorum maintaining that he’s never been fooled by science. But in the case of Palin, it’s not that she refudiates the science, as she might say. What’s more likely is that she’s made the calculation that caring about global warming isn’t particularly politically advantageous right now. She’s not alone of course—both Tim Pawlenty and Newt Gingrich have taken similar approaches. But in her case, Alaska’s email dump contains an interesting insight into what she believes when she’s not running for national office.