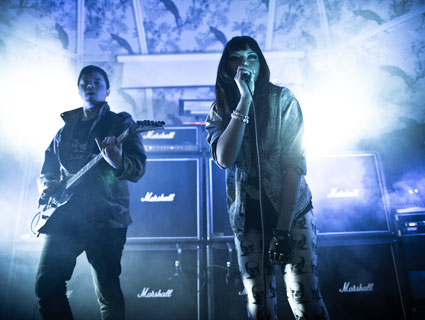 Last Monday night, in a packed, fogged-up space in San Francisco, the mosh pit of young Sleigh Bells fans got a little rowdy. They shoved each other relentlessly, shot their fists in the air, and tossed their hair around. Up on stage, vocalist Alexis Krauss and guitarist/producer Derek Miller delivered a head-banging, punk-meets-hip-hop performance, riling up the crowd so much that by about the 10th song and Krauss’ fourth crowd-surf, security struggled a bit to retrieve her from the clenches of the fans. “I think our music can be cathartic for kids,” Krauss told me later, as Sleigh Bells’ tour bus passed through the hills of Utah. “You can just go out and get really sweaty, and lose their shit, and it feels good.”

Krauss doesn’t mind the intensity. Well, except a few encounters of the creepier kind, where fans tried to bite her or take her shirt off. But looking back on the group’s 14-month tour promoting their first album, Treats, Krauss is quite pleased. “It’s not like we’re doing anything revolutionary,” she says, but “I think one of the reasons why we’ve gotten a lot of attention is because our music is extremely polarizing. You either love it or you hate it.”

In the short span of two years, Krauss and Miller have received more love than hate. The duo caught their first break in 2009 after performing at the CMJ festival in Brooklyn, where they caught Spike Jonze’s attention. Jonze wrote to them afterward: “This is really rad.” A week later, M.I.A. emailed the band with interest. Jonze had played her their music, and she dug it. She signed them on to her new record label, N.E.E.T., and less than a year later, Treats hit the streets. No less than Tim Nordwind of the internet sensation OK Go, told us it was his favorite album of 2010.

“Our music is extremely polarizing,” says Krauss. “You either love it or you hate it.”

Sleigh Bells’ sound has a touch of Björk, Timbaland, and Muse. Miller’s weighty guitar riffs, tearing through a reverberating wall of synthetic melody and thunderous electronic drums, envelope Krauss’ whispering, ghost-like vocals. The combination is dramatic and carries a certain teen-angst quality that perhaps speaks to the frustrations of an over-stimulated, over-loaded, jaded youth. “It’s demanding music,” Krauss says. “Derek and I are really hard on ourselves.”

The dedication derives from a more personal place. Krauss, 25, was an international-studies major in college, where she researched human rights and education. Shocked by the education gap in New York, she joined Teach for America after graduation to work with fourth-graders in the South Bronx. Switching to music full-time was a tough decision, she says. “I would probably still be teaching if I hadn’t met Derek.”

In the studio and on stage, Krauss and Miller keep things bare-bones, an approach some critics have taken issue with. Other than Miller and his guitar, Sleigh Bells does not use live instruments; instead, an iPod plays backing tracks created in the studio. “It wouldn’t do justice to the sound if we had a live drummer playing with us,” she says. “We could have a DJ spinning the beat, but that’s one more person we’d have to pay and one more person we’d have to feed. And honestly, what’s the difference between pressing space bar on a lap top and pressing play on an iPod?” Krauss dismisses the idea that you aren’t a real band unless you play like one.

But haters will be haters, and Krauss and Miller are okay with that, too. “Our shows aren’t about people watching us and worshipping us as musicians. It’s about something much less precious.”

Some of the worshippers might disagree. Last Monday’s show concluded shortly after a fan yanked Krauss’ mic out of her hands and wouldn’t let go. The duo simply walked off the stage. The lights went on, revealing a sea of stunned faces. Minutes later, an eclectic mix of Ol’ Dirty Bastard fans, girls with plunging necklines and 4-inch stilettos, and bookish types swarmed Krauss for autographs as she emerged from backstage.

Sleigh Bells, Live at the Paradise in Boston (2010) from Boston Phoenix on Vimeo.