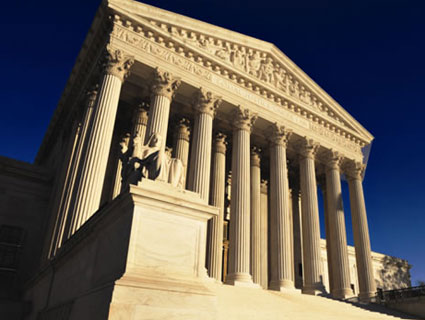 Score another one for James Bopp, the veteran conservative lawyer who has helped kill off much of the country’s campaign finance regulatory system. On Monday, the US Supreme Court struck down an innovative Arizona public financing law that would have provided extra public money to candidates who were being outspent by privately funded candidates and independent expenditure groups. The drafters of the law had hoped that by using public funds to generate more speech, not less, they might be able to avoid many of the free speech issues that have bedeviled other attempts to level the campaign playing field.

The Roberts Court, though, was having none of that. In a 5-4 ruling (PDF) in Arizona Free Enterprise Club’s Freedom PAC v Bennett, the court sided with Bopp, who represented one of the self-financed candidates who were the plaintiffs in the case. The court found that the law would force well-funded candidates to decide between spending more money and thus speaking out more, or spending less to avoid helping their opponents earn more public money for their campaigns. The court found the position untenable with constitutional guarantees of free speech.

The opinion, written by Roberts, draws heavily on its previous ruling in Davis vs FEC, in which the court struck down the “Millionaire’s amendment” to the McCain-Feingold law, which had allowed candidates to avoid campaign contribution limits if they were running against a wealthy self-financed candidate. That was partly Bopp’s case, too. More significantly, though, one of the only reasons that the court could even hear the Arizona law is because of a case Bopp won back in 1994 in the Eighth Circuit Court of Appeals, which invalidated a public financing scheme in Minnesota. That decision created the circuit court split that allowed the high court to step in and decide this case.

When I talked to Bopp last year about the Arizona case, he was pretty sure he was going to win. He told me:

Public funding, he argues, suppresses speech because it sets spending limits for candidates who accept it. “The problem is, the reformers are hoisting themselves on their own petard,” he explains. “Their real goal [with public-financing schemes] is to restrict expenditures.”

That, in a nutshell, is what the Supreme Court said today, too.