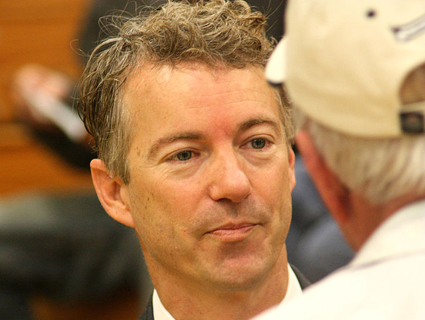 “In order to rebuild strength and confidence in our economy, we need both the fiscal discipline to cut wasteful spending and the monetary discipline to restrain further destructive monetizing of our debt,” [Lee] said. “This legislation would encourage wider adoption of sound money measures, and that’s a step in the right direction.”

In the same statement, Lee said the dollar has lost 98 percent of its value since 1913. Sen. Paul said it would show that “states are serious about an alternative to a weakening dollar.”

The bill is designed to make it easier for state governments to transition to the use of so-called “sound-money” currency. As I reported back in March, more than a dozen states have introduced proposals to, in various ways, promote the use of alternative currencies in official transactions. The argument for this is a constitutional one—supporters say they’re simply trying to bring their states in line with Article 1 Section 10 of the Constitution, which stipulates that gold and silver coins be legal tender.

There are also economic concerns. As tends to be the case with collectors of precious metals, supporters believe that the nation’s finances are in even worse shape than we’ve been led to believe, and that the only way out of a Zimbabwe-style (or Weimar-style—take your pick) inflationary collapse is a return to the hard stuff. “It’s kind of like if you think back to the Katrina catastrophe, and you read about all the proposals that were made to strengthen and secure the levies that were just never done,” as one gold booster told me at the time. Utah—which, in the grips of a tea party fervor, replaced long-time conservative stalwart Robert Bennett with Lee last summer—became the first state to actually pass a pro-gold bill back in March. That law asserts the right of the state to use gold and silver as legal tender and sets up a committee to study the implementation.

But states that are looking to go back to gold face a few obstacles—namely, that there’s no infrastructure to actually handle an infusion of gold currency. Carrying around a pouch of gold coins would be a burden (and vaguely Medieval), and so boosters tend to agree that for it really to take off, you’d need a centralized storage facility and then a debit-card-like transaction system, neither of which currently exist. And then there’s the cost: gold and silver coins from the US Mint are the only coins that could be used as legal tender, and there’s a significant markup on those in addition to the taxes. The Lee-Demint-Paul bill is attempting to tackle just one piece of the problem by making it less cost-prohibitive.

So, does the bill stand any chance of passing? It’s a long shot. But it doesn’t hurt that Senate Majority Leader Harry Reid (D-NV) is himself an unabashed cheerleader for the gold lobby.