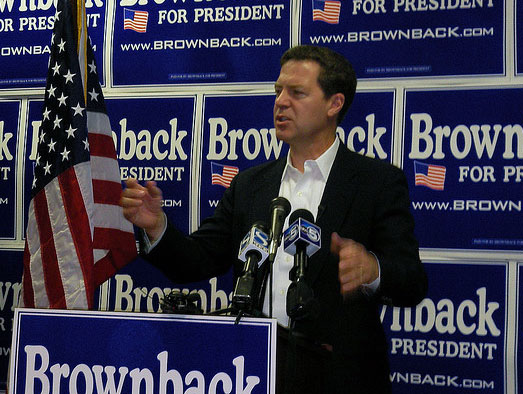 Sam Brownback, the current governor of Kansas, speaks to supporters during his 2008 campaign for president.<a href="http://www.flickr.com/photos/iowapolitics/513736240/sizes/z/in/photostream/">Iowa Politics</a>/Flickr

It’s certainly no secret that Kansas Gov. Sam Brownback (R) is a staunch opponent of abortion. It was his signature issue in the US Senate, a major campaign issue for him when he ran for the GOP presidential nomination three years ago, and he has already signed a number of anti-abortion bills into law—including one setting strict new standards for abortion clinics that threatened to close two out of the three providers in the state before a judge blocked them last week. On Thursday, Brownback again riled reproductive rights supporters by appointing the lawyer who has represented one of the country’s most extreme anti-abortion groups to a state health board that oversees abortion providers.

Brownback has tapped Rick Macias, a lawyer that has represented the anti-abortion group Operation Rescue, to serve on the Kansas Board of Healing Arts. Operation Rescue is a national group that moved its offices to Kansas in 2007. The group moved in order to focus their opposition work on Dr. George Tiller, who provided late-term abortion services in his Wichita clinic until an anti-abortion extremist murdered him in his church in May 2009.

The 15-member Board of Healing Arts handles licensing for medical doctors, physical therapists, and other health care providers. Macias would serve on the board through June 2014.

Macias has represented anti-abortion activists in cases dating back to the early ’90s in which they were accused of trespassing at Tiller’s clinic to protest. He has also represented Kansans for Life in court. Macias has a private firm specializing in adoption services, and his website includes the tag line, “Your Baby, Your Choices!” He has also supported anti-abortion electoral candidates through the Kansans for Life Political Action Committee. His brother, Archie Macias, currently serves as the treasurer of the PAC.

“This is yet another play in a full-on war against abortion in Kansas,” said Bonnie Scott Jones, deputy director of the US legal program at the Center for Reproductive Rights and the lead attorney representing the two abortion clinics who have challenged the state’s new regulations. “Nominating an Operation Rescue lawyer to this board is like hiring a fox to guard a henhouse.”

Operation Rescue president Troy Newman was, as one might expect, not as opposed to the appointment, telling the Kansas City Star that Macias is a “level-headed, well-rounded attorney.”