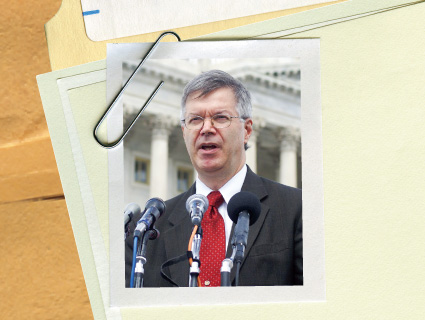 A.K.A.: “The most effective lobbyist in Washington” —National Review

“The indispensible man behind all of the greatest pro-life victories in Congress since Roe v. Wade” —Life Prizes

POSITION: Chief lobbyist for National Right to Life Committee, the nation’s preeminent anti-abortion group. He’s been there since 1981. Most recently the unseen force behind the House GOP’s push to orchestrate the most audacious legislative assault on abortion rights in recent memory.

DISTINGUISHING FEATURES: Wears thick glasses and off-the-rack suits. Lacks the brusque manner and speedy walk of most K Street types. Unflappable, doesn’t schmooze politicians, speaks slowly enough for reporters to keep up. The rare lobbyist who’s actually a fervent believer in his cause.

KNOWN ENEMIES: The obvious ones: NARAL Pro-Choice America, Planned Parenthood, other pro-choice groups. Johnson receives hate mail and threats from people who think he’s too pro-life—but also from those who think he doesn’t fight hard enough.

M.O.: Working methodically and relentlessly to roll back abortion rights. But he’s not afraid to compromise: In 1993, abortion-rights supporters tried to repeal the Hyde Amendment (PDF), which bans Medicaid funding for abortion. Then-Rep. Henry Hyde (R-Ill.) and Johnson’s group engineered a deal that saved the ban, but added exemptions for rape and incest.

LATEST ACHIEVEMENTS: Johnson helped craft HR 3, the No Taxpayer Funding for Abortion Act, one of the GOP’s top legislative priorities this year. The bill, sponsored by Rep. Smith, is a hodgepodge of anti-abortion provisions, such as forbidding small businesses that receive tax credits for health insurance from buying plans that cover abortions; preventing soldiers and their spouses stationed in countries where abortion is illegal (like Afghanistan) from obtaining the procedure on US bases; and potentially blocking the use of Medicaid dollars to fund abortions for victims of statutory rape. The original draft confined federal abortion funds to cases of “forcible rape.”

HR 3 passed the House in May but will have trouble in the Senate, where pro-choice lawmakers have enough votes to filibuster it. President Obama, whom Johnson believes “wants to advance and expand abortion as much as possible,” has promised a veto (PDF) if the bill crosses his desk. Johnson and his allies’ Plan B is to attach HR 3 or its provisions to must-pass legislation, like the budget.

HR 3 is already having an impact. In 2009, Obama and the Democrats killed a ban on using local funds to subsidize abortions in the District of Columbia. But in April, in response to House demands, they agreed to reinstate the DC abortion ban in exchange for GOP votes on a budget deal. “John, I will give you DC abortion,” Obama reportedly told House Speaker John Boehner (R-Ohio). “I am not happy about it.”

IN HIS OWN WORDS: “A lot of things require more than one Congress to achieve. We don’t sit down and say, ‘If the odds are against it getting all the way through the process in this Congress, it’s not a worthwhile endeavor.’ It is a worthwhile endeavor if it raises an important public policy issue, and we can make progress toward ultimately making it federal public policy.”