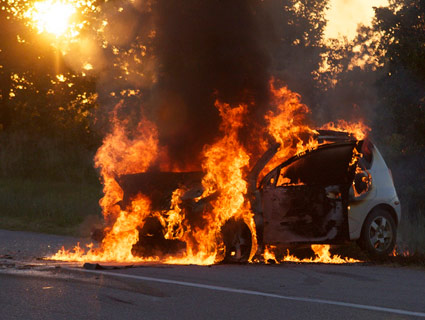 Officially, his books—highly praised by the National Safety Council—were deterrents, meant to scare my generation straight with huge dollops of teenage gore. In fact, he was our asphalt Homer, exalting doomed teenage heroes and inviting us to emulate their legend.

One of his books ends with an apocalyptic collision at a crossroads that more or less wipes out the entire graduating class of a small Iowa town. We loved this passage so much that we used to read it aloud to each other.

It’s hard not to think of the great Felsen, who died in 1995, while browsing the business pages these days. There, after all, are the Tea Party Republicans, accelerator punched to the floor, grinning like demons as they approach Deadman’s Curve. (John Boehner and David Brooks, in the back seat, are of course screaming in fear.)

The Felsen analogy seems even stronger when you leave local turf for a global view. From the air, where those Iowa cornstalks don’t conceal the pattern of blind convergence, the world economic situation looks distinctly like a crash waiting to happen. From three directions, the United States, the European Union, and China are blindly speeding toward the same intersection. The question is: Will anyone survive to attend the prom?

Shaking the Three Pillars of McWorld

Let me reprise the obvious, but seldom discussed. Even if debt-limit doomsday is averted, Obama has already hocked the farm and sold the kids. With breathtaking contempt for the liberal wing of his own party, he’s offered to put the sacrosanct remnant of the New Deal safety net on the auction bloc to appease a hypothetical “center” and win reelection at any price. (Dick Nixon, old socialist, where are you now that we need you?)

As a result, like the Phoenicians in the Bible, we’ll sacrifice our children (and their schoolteachers) to Moloch, now called Deficit. The bloodbath in the public sector, together with an abrupt shutoff of unemployment benefits, will negatively multiply through the demand side of the economy until joblessness is in teenage digits and Lady Gaga is singing “Brother, Can You Spare a Dime?”

Lest we forget, we also live in a globalized economy where Americans are consumers of the last resort and the dollar is still the safe haven for the planet’s hoarded surplus value. The new recession that the Republicans are engineering with such impunity will instantly put into doubt all three pillars of McWorld, each already shakier than generally imagined: American consumption, European stability, and Chinese growth.

Across the Atlantic, the European Union is demonstrating that it is exclusively a union of big banks and mega-creditors, grimly determined to make the Greeks sell off the Parthenon and the Irish emigrate to Australia. One doesn’t have to be a Keynesian to know that, should this happen, the winds will only blow colder thereafter. (If German jobs have so far been saved, it is only because China and the other BRICs—Brazil, Russia, and India—have been buying so many machine tools and Mercedes.)

China, of course, now props up the world, but the question is: For how much longer? Officially, the People’s Republic of China is in the midst of an epochal transition from an export-based to a consumer-based economy. The ultimate goal of which is not only to turn the average Chinese into a suburban motorist, but also to break the perverse dependency that ties that country’s growth to an American trade deficit Beijing must, in turn, finance in order to keep the Yuan from appreciating.

Despite the reassuring image of omniscient Beijing mandarins in cool control of the financial system, China actually seems to be functioning more like 160 iterations of Boardwalk Empire, where big city political bosses and allied private developers are able to forge their own backdoor deals with giant state banks.

In effect, a shadow banking system has arisen with big banks moving loans off their balance sheets into phony trust companies and thus evading official caps on total lending. Last week, Moody’s Business Service reported that the Chinese banking system was concealing one-half-trillion dollars in problematic loans, mainly for municipal vanity projects. Another rating service warned that non-performing loans could constitute as much as 30% of bank portfolios.

Real-estate speculation, meanwhile, is vacuuming up domestic savings as urban families, faced with soaring home values, rush to invest in property before they are priced out of the market. (Sound familiar?) According to Business Week, residential housing investment now accounts for 9% of the gross domestic product, up from only 3.4% in 2003.

So, will Chengdu become the next Orlando and China Construction Bank the next Lehman Brothers? Odd, the credulity of so many otherwise conservative pundits, who have bought into the idea that the Chinese Communist leadership has discovered the law of perpetual motion, creating a market economy immune to business cycles or speculative manias.

If China has a hard landing, it will also break the bones of leading suppliers like Brazil, Indonesia, and Australia. Japan, already mired in recession after triple mega-disasters, is acutely sensitive to further shocks from its principal markets. And the Arab Spring may turn to winter if new governments cannot grow employment or contain the inflation of food prices.

As the three great economic blocs accelerate toward synchronized depression, I find that I’m no longer as thrilled as I was at 14 by the prospect of a classic Felsen ending—all tangled metal and young bodies.

Mike Davis teaches in the Creative Writing Program at the University of California, Riverside. He is the author of Planet of Slums, among many other works. He’s currently writing a book about employment, global warming, and urban reconstruction for Metropolitan Books. To listen to Timothy MacBain’s latest TomCast audio interview in which Davis discusses a possible Chinese real estate crash and other perils of the global economic system, click here, or download it to your iPod here. To stay on top of important articles like these, sign up to receive the latest updates from TomDispatch.com here.