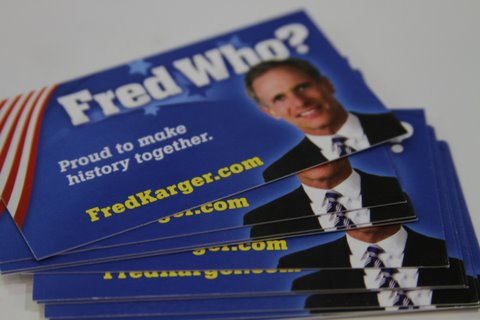 Upstart GOP presidential candidate Fred Karger, the first gay Republican ever to run for the nomination, is not exactly raising the big bucks. Gay Republicans are either few and far between, or they’re putting their money on, well, Barack Obama. But given his unusual niche, Karger isn’t doing all that badly either. Lost in all the news coverage of presidential fundraising is this little tidbit: Karger reported raising $264,000 in the last quarter, more than pot-promoter and former New Mexico governor Gary Johnson, who raised $180,000, and not that far behind former Pennsylvania senator and arch anti-gay candidate Rick Santorum, who raised $581,000. Of course, $230,000 of Karger’s haul came from a single donor: Fred Karger.

Still, Karger seems highly skilled at getting his media coverage for free. He’s made good use of all the indignities heaped on him by anti-gay Republican gatekeepers, who’ve refused to let him participate in any major televised debates. He’s used his years of experience in the opposition research field to win coverage for his attacks on fellow candidate Mitt Romney. Then, last week, he made headlines after he challenged Rep. Michele Bachmann’s husband to a debate over his support of “reparative therapy,” a discredited form of psychological counseling that supposedly helps gays become straight. Karger urged Bachmann to “come out of the closet” to defend his Christian counseling clinics, which reportedly offer the therapy. Karger used the ensuing media coverage to take a few shots at Michele Bachmann as well, calling her a bigot for her anti-gay views.

Karger is certainly adding some extra color to GOP primary this year. This week, he’ll campaign in New Hampshire for a few days before traveling to San Francisco, where “Real World” hottie Mike Manning will headline a big fundraiser on Thursday that could bring in a few more donors to keep Karger’s show on the road.