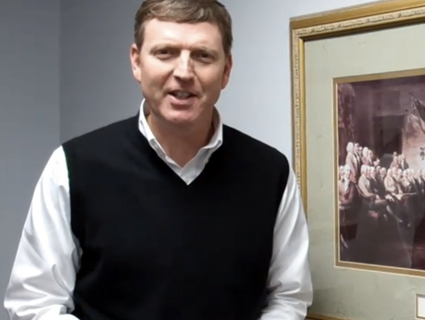 On Thursday, one of Iowa’s most influential social conservative organizations, The Family Leader, informed GOP presidential candidates that to win the group’s endorsement, they’ll have to sign a pledge. Family Leader president Bob Vander Plaats, a former Mike Huckabee ally, wants GOP contenders to commit to a list of 14 red-meat items, including opposition to gay marriage, a ban on Islamic Sharia law, a rejection of pornography, and an affirmation that married couples have better sex.

The group, which spearheaded the successful campaign to unseat state supreme court judges who had voted to legalize gay marriage, has been courted by candidates like Michele Bachmann and Tim Pawlenty as a way of tapping into the state’s huge bloc of conservative Christian caucusgoers. What’s in the pledge? Here’s a quick rundown:

Presidential candidates who sign The Marriage Vow will sign off on support of personal fidelity to his/her spouse, appointing faithful constitutionalists as judges, opposition to any redefinition of marriage, and prompt reform of uneconomic and anti-marriage aspects of welfare policy, tax policy, and divorce law. The Marriage Vow also outlines support for the legal advocacy for the Defense of Marriage Act (DOMA), humane efforts to protect women and children, rejection of anti-women Sharia Islam, safeguards for all married and unmarried U.S. military personnel, and commitment to downsizing government and the burden upon American families.

The document itself gets more specific. Point 5 begins with a “Recognition of the overwhelming statistical evidence that married people enjoy better health, better sex…” Point 9 rejects “forms of pornography and prostitution, infanticide, abortion and other types of coercion or stolen innocence.”

So who will jump on board? Much of the platform seems to mix fairly well with standard conservative talking points, but there might be a few dissenters. At the New Hampshire Republican debate last month, for instance, frontrunner Mitt Romney pointedly came to the defense of Muslims and smiled away any suggestion that American Muslims would be any less qualified to serve in his administration than anyone else. Because Sharia Islam is actually just a synonym for Islam, it would seem like a radical departure for Romney to suddenly embrace the Family Leader’s far-right language. He also declined to sign the Susan B. Anthony List’s pledge, which affirmed candidates’ opposition to appointing pro-choice officials, because he felt it limited his flexibility to make cabinet and judicial appointments.

Update: That was quick. Bachmann’s on board.