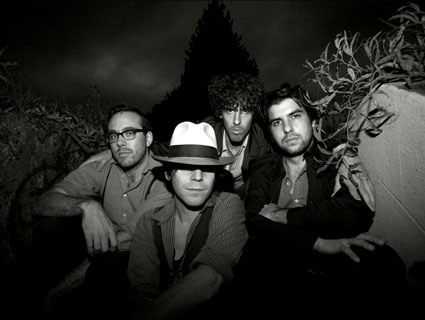 Years ago, Sean Scolnick would have told you he’s the bastard child of Hasil Adkins, the Appalachian country-and-blues legend known for birthing rockabilly songs like “No More Hotdogs” and “Chicken Walk.” He wasn’t far off, since, like Adkins, Scolnick spends most of his time on the road, often solo. And with a boyish frame usually found under a vest and a tilted porkpie hat, he’s a natural fit against a backcountry landscape.

But Scolnick, better known as Langhorne Slim, hails from the suburbs of northeast Pennsylvania, where he didn’t get out much, he says, and was once kicked out of school. That might explain his sidewalk-scuffed style, which transcends the traditional blues genre. Some time after moving to New York for college, Scolnick hit the road and his nomadic career has saved him for most of his adult life from having to to pay rent. Reviewers have compared the 30-year-old singer-songwriter to Bob Dylan and The Avett Brothers (with whom he has toured), and his last album, 2009’s Be Set Free, was produced by Chris Funk of The Decemberists.

Scolnick distinguishes himself, meanwhile, with heartbreaking lyrics sung over punk-rock country blues with a dash of Kurt Cobainesque angst. “I’m not sure that there’s any other kind, but the songs I write are love songs,” he says. I caught up with Mr. Slim in advance of his July 22 show at The Independent in San Francisco. (Click here for his full tour schedule.) The singer, battling a cold, put up with my questions about hunky bachelorhood, vegetarianism on the road, and why he named his act after his hometown.

Mother Jones: You grew up in Langhorne, a big Philly suburb, as well as New York City. How’d you get into folk and blues?

Langhorne Slim: I love all kind of music and I think there’s a bit of a lot of different styles in my own music. Early blues and folk are to me as raw and real as it gets. I’m most drawn to the roots of various musical styles whether it be blues, rock ‘n’ roll, jazz, or whatever. For me it’s at the beginnings of these forms that they are at their most primitive, honest state.

MJ: When did you start getting into music?

LS: As far back as I can remember. I’ve always been singing and trying to get people to listen.

MJ: Why did you to decide pay homage to your hometown in your stage name?

LS: School was tough for me, and I have certainly found more personal freedom in being grown up. As for the name, though, I just thought it sounded cool, and it stuck. Also, when I go back, I can pretend libraries and hotels are named after me.

MJ: Can you tell me about any early memories of performing on stage?

LS: I remember feeling awkward most of the time, but very much myself and at home on stage. I should probably consult a therapist about that, but it is certainly that feeling that has driven me to make music and perform, that feeling of comfort.

MJ: Your career has really picked up since 2008. At what point did you feel like, “Here’s my big break”?

LS: I’m still very much hunting for that feeling. Wherever you are, there’s someplace you haven’t been and want like hell to get to.

MJ: How have you managed to get by your whole life without paying rent?

MJ: Are you aware that many of your fans regard you as a hunky country bachelor? How do you react to that?

LS: By telling my girlfriend that I love her and that she looks very pretty today. Other than that, I have no problem with your claim and am in a contained rejoice that you asked the question at all.

MJ: You’re on the road a lot. What’s your songwriting process like?

LS: I don’t have a set process. The main thing is to be present to capture the bits and pieces as they come.

MJ: Is it hard being a vegetarian on the road?

LS: It’s harder in some places than others, but it has gotten much much easier over the years.

MJ: You’ve been compared to the likes of Dylan and The Avetts. What do you do to make yourself stand out in the folk/blues genre?

LS: I do love me some Dylan and some Avett Bros! I don’t try to distinguish myself, though. I just do my thing and work at getting my music out there. I would much rather be myself than try to not be like others.

MJ: How are you liking Portland? Do you ever think about moving back east?

LS: I love it! Portland is my home for now, but my mom and a lot of family are still in Pennsylvania, Jersey, and New York City, so I like to go back and will always have love in my heart for the East Coast.