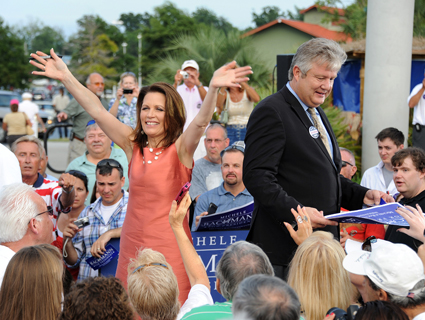 Rep. Michele Bachmann (R-Minn.) and her husband, Marcus Bachmann, greet the crowd at a campaign stop in South Carolina.Jason Moore</a>/Zuma

Politico‘s James Hohmann published a story Tuesday on the unique role of Rep. Michele Bachmann’s husband, Marcus, on the campaign trail. Aside from the obvious points about how he’s had to pick up the slack on the home front since his wife left for Washington, the piece notes a few of the recent controversies that could become “liabilities” on the campaign trail—namely, the fact that his family farm received subsidies, and that his Christian therapy practice accepted Medicaid funding.

That might be a stretch. The fact that Marcus Bachmann received farm subsidies is bad because they’re the kind of government handout the candidate loves to hate, but it’s really not the kind of thing that sways voters—especially when you consider that a lot of Republican primary voters also receive farm subsidies. There is one part of the Marcus Bachmann story, though, that is already becoming an issue for the Bachmann campaign.

In addition to the fairly commonplace practice of accepting Medicaid payments, Bachmann’s Christian therapy clinic has also been accused of dabbling in something called “conversion” or “reparative” therapy, in which gay people are supposedly cured of their gayness through steady doses of prayer. The American Psychiatric Association does not endorse “conversion therapy” and has suggested it might have damaging mental health consequences. But as Hohmann’s story notes, Marcus Bachmann is not a member of any of Minnesota’s three major professional organizations for psychologists. For Marcus Bachmann, this is bigger than science; it’s a moral imperative. Gays, he has said, are like “barbarians” that need to be “disciplined.”

That’s extreme, and in a post-DADT, Cuomosexual world, it’s only going to become increasingly more so (even Focus on the Family has conceded that the younger generations feel differently about things like gay marriage). Because Michele has identified Marcus as her top adviser, he’s fair game for the criticism that would undoubtedly pour out if, say, top strategist Ed Rollins had said the same thing. Marcus Bachmann is the kind of character that candidates normally wouldn’t think twice about throwing under the bus, or at least keeping their distance from, once they’ve finally made it. But that’s obviously not possible.

The problems don’t end with the therapy, though. Marcus’ fiercely anti-gay language has itself spawned the predictable, unsubstantiated “takes one to know one” backlash. It’s taken less than a week for political observers and random celebrities on Twitter to develop their own theories about what’s really driving the candidate’s husband. Here’s what Cher (yes, Cher) tweeted on Friday, via the City Pages:

“But boys please utube this asshole & tell me what you think… Cause my Gay-Dar is GOING OFF !!!”

She then pondered purchasing some sequins for Marcus and strangling him with her boa. That’s a representative sample. Gawker‘s Lauri Apple rounds up some others:

• Kids in the Hall comic and television actor Dave Foley, asked via Twitter: “How can Michele Bachman be opposed to gay marriage when she is married to gay man.” Foley…tweeted out a few other lines about Bachmann, using the hashtag “#MarcusBachmanIsSoGay.”
• Keith Olbermann referred to Bachmann as a “bizarre-sounding man who’s calling gays ‘barbarians'” and wondered how you can “hide” him without putting him in some sort of closet.

And so on. Apple also finds Andrew Sullivan (who is gay) referring to Marcus as the “ssuper-sserial hunter of gays.” This echoes something Bachmann’s loudest critics in Minnesota have been hinting at—without any basis in fact—for a while now. The writers of Dump Bachmann, who are the source of much of the most incriminating material on the couple, refer to Marcus as “the fabulous Marcus Bachmann” and enjoy noting that he has a keen fashion sense; on Tuesday, City Pages straight-up asked, “Marcus Bachmann: Gay or Straight?” David Joseph DeGrio, chair of the Minnesota LGBT group Stonewall DFL, has pushed back on the whisper campaign, writing that “I believe that perceived sexuality was being used as an attack on Marcus Bachmann, and I find it unacceptable to use perceived sexuality as an attack on anybody.”

Crude caricatures of candidate’s spouses are as unfair as they are inevitable. Teresa Heinz Kerry was foreign, Michelle Obama was “Stokely Carmichael in a designer dress,” and Cindy McCain was a Stepford wife. In a world where Elena Kagan’s softball career was considered a legitimate national news story, the glare of the national spotlight is shaping up to be a very uncomfortable one for the would-be first couple.

Update: WaPo‘s Jason Horowitz has a profile of Marcus Bachmann this morning as well. It doesn’t actually break any new ground, but it’s a quick read and gives some interesting background on where the couple is coming from.