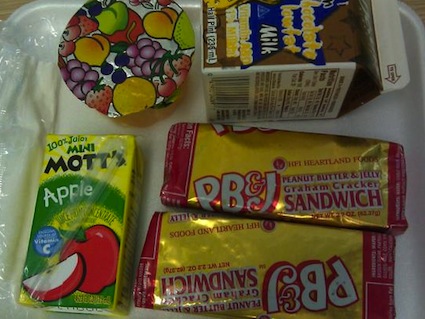 PB&J as metaphor: a prefab lunch in an Illinois public-school cafeteria. <a href="http://fedupwithschoollunch.blogspot.com/search/label/daily%20school%20lunch%20post">Mrs. Q</a>/Fed Up with Lunch blog

As negotiations over the “debt ceiling” drag on (handy MoJo explainer here), one thing is clear: Austerity is coming to the United States. No matter what—whether the Republicans accept minor tax hikes as part of a deal; whether bond investors freak out or don’t freak out; whether Obama and the Democrats completely cave in to GOP insanity or just partially cave (as they already have)—the federal government will slice spending by about $1 trillion over the next decade, most likely including cuts to important social-insurance programs like Medicare and Medicaid.

Let’s be clear: Slashing government spending at a time of lingering 9 percent unemployment and stagnant wages is imbecilic. You don’t have to be John Maynard Keynes to understand that when corporations stop hiring and investing, the federal government has to fill the gap, not widen it. And as the University of Texas economist James K. Galbraith has demonstrated numerous times over the past year (most recently here), the most-dire problems facing the nation are the related ones of underemployment and underinvestment in vital infrastructure, not budget deficits or the national debt. Our existing fossil-fuel-based infrastructure—roads, bridges—is crumbling. And if we’re going to transition to a post-fossil-fuel economy, we’ll need to build up decentralized electricity grids, wind and solar energy capacity, mass transit, local and regional food systems, and more—investments that aren’t being made at nearly a sufficient rate by private actors.

Galbraith likes to quote Keynes, architect of the postwar recovery: “There is work to do; there are men to do it. Why not bring them together?” Instead, congressional GOP leaders and (to a lesser extent) the president seem intent on keeping them apart. Results will likely be disastrous; the cascading effects of ill-timed austerity will likely lead to yet larger bills down the road. Penny wise, dollar poor.

Indeed, it’s already happening at the municipal level. Pressured by the bad economy and reductions in federal and state spending, cities across the nation face gaping deficits—and are responding by cutting vital services. Monday’s New York Times brought a taste of things to come in the form of Kevin Sack’s piece on budget cuts in Wilmington, N.C. The story’s intro involves what happens when cities “save money” by failing to maintain stuff like fire trucks. Unhappily, the anecdote reads like one of Aesop’s fable for our time.

The city of Philadelphia served up a whopper of an example regarding my own topic, food, last week. To help close a budget gap, Philly announced it will shutter 26 elementary- and middle-school cafeteria kitchens, many of them “in the city’s poorest neighborhoods,” reports the Philadelphia Inquirer. The affected schools “will switch from food prepared in the school by cafeteria workers to meals cooked, plated, and frozen several days before consumption and trucked in from a warehouse in Brooklyn, N.Y.”

Not having to maintain functioning kitchens and pay workers to staff them will shave $2.3 million from the city’s budget—but won’t go very far toward decreasing its $629 million deficit. And the collateral damage will likely be large. To wit:

• An untold number of kitchen workers are tossed off the city’s payrolls and into the city’s already-swollen ranks of the unemployed. They’ll adjust their spending accordingly, putting yet more pressure on the local tax base.

• By shuttering nearly all of the city’s remaining school kitchens—the Inquirer reports that even before the move, only 30 percent of Philly schools had them—officials are icing out local food suppliers and distributors, again putting downward pressure on a weak economy.

• The quality of the prefab, trucked-in meals will likely be quite poor, teaching the nearly 1,700 kids affected by the closures that cheap industrial crap is what’s good to eat. Do the math. The federal government reimburses school cafeterias less than $3 per lunch. If a private company is going to book a profit while prepping meals and shipping them frozen from Brooklyn to Philly at that rate, you can be sure it’s using the cheapest ingredients it can get away with. For an example of a school cafeteria that subjects students to awful premade meals, see the anonymous Illinois teacher Mrs. Q’s account of her year eating in her school’s cafeteria in solidarity with her students. The Inquirer quotes two local food-related NGOs lamenting the drop in quality between schoolmade and trucked-in lunches.

I should emphasize that the the shame here resides not so much with Philadelphia as with the federal government. Last year, the White House and Congress set the table for the Philadelphia kitchen closures by passing a childhood nutrition bill that increased federal funding for school lunches by just pennies per meal.

And more broadly speaking, the city’s leaders are merely answering incessant calls for “belt tightening” in the midst of a punishing jobs recession. From the maddest tea partier in the House to the president himself, national politicians are pounding the drums of deficit hysteria. Just this past weekend, Obama declared:

Government has to start living within its means, just like families do. We have to cut the spending we can’t afford so we can put the economy on sounder footing, and give our businesses the confidence they need to grow and create jobs.

The gods of fiscal austerity will be appeased. The only question is, how much pain will they exact from us before we realize that their counsel is false?