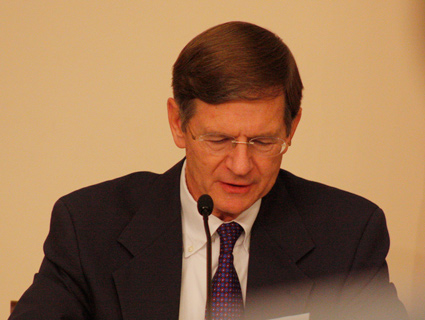 A new immigration bill in Congress, the Hinder the Administration’s Legalization Temptation (HALT) Act, which a subcommittee of the House Judiciary Committee heard testimony on yesterday, has come under fire for a variety of reasons, from its, er, unusual name to its dramatic curtailment of the executive branch’s immigration prerogatives. As the Center for American Progress points out, the law would, among other things, prohibit the Department of Homeland Security from granting a waiver for the undocumented spouse of a soldier serving overseas to temporarily remain in the US. Perhaps its most radical feature, though, is its expiration date, which just happens to be January 21, 2013—the day after Inauguration Day.

Crazy coincidence? Not a chance. In a letter to congressional colleagues (PDF), the bill’s sponsor Rep. Lamar Smith (R-Texas) wrote, “Because of the Obama Administration’s record, it cannot be trusted with these powers.” He went on to urge, “Let’s remind the Obama Administration that the founding fathers put Congress in charge of setting the nation’s immigration policy.”

The move appears to be unprecedented: never before has Congress stripped executive powers from an incumbent administration exclusively. The closest parallel to this sort of administration-specific legislation would be the Tenure of Office Act of 1867, which the Radical Republicans passed to restrict Andrew Johnson’s authority to remove cabinet members without Congressional assent (and whose violation by Johnson served as the pretext for his impeachment). However, even that law didn’t sunset at the end of Johnson’s term and was only repealed 20 years later.

The HALT bill, of course, stands no chance of becoming law (there’s President Obama’s veto, should it come to that). Nonetheless, pursuing this legislation serves at least two purposes for Republicans, 25 of whom are HALT co-sponsors. First, hearings such as yesterday’s allow Republicans to portray the president as soft on illegal immigration, even as his administration deports record numbers of undocumented residents. Second, according to University of Pennsylvania political science professor Rogers Smith, anti-immigration advocates believe that maintaining a steady stream of legislation that says “we don’t want you and we’re going after you”—even if it doesn’t get enacted—can almost get rid of as many immigrants through attrition as actually passing those laws.