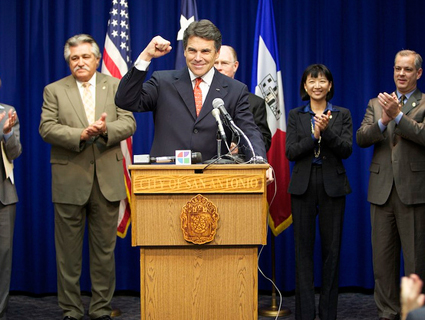 Texas Gov. Rick Perry’s big break in politics came in 1990, when he won a tight race against incumbent Jim Hightower, a progressive Democrat, to become State Agriculture Commissioner. It might not sound like much, but a statewide office is a statewide office, and Perry, who is now seriously thinking about running for president, won in a pretty rough electoral climate. (He had some help from campaign manager Karl Rove, who zeroed in on ethics lapses by a Hightower subordinate.*)

The gulf between Hightower, an organic-farming booster and later a Ralph Nader supporter, and Perry, an arch-conservative who supports criminalizing gay sex, is pretty wide. How wide? Well, in a 1991 Texas Monthly story, Dana Rubin explains that one Rick Perry’s first orders of business was to cancel the agency’s subscription to MoJo:

In early January, an employee armed with a video camera swept through the Austin headquarters of the Texas Department of Agriculture, making a record of every office: desks, bookshelves, computers, trash cans. Newly elected commissioner Rick Perry had ordered a top-to-bottom inventory, and his staff wanted to account for every item in the agency. Employees were asked to strip the posters, signs, and comic strips from their doors and hallways. Within days every vestige of the folksy, college dormitory atmosphere cultivated under former commissioner Jim Hightower had vanished. Gone was the rusty old plow from the lobby. Gone were the nostalgic Depression-era photographs from the walls. Gone were the agency’s subscriptions to leftist periodicals such as Mother Jones, the Progressive, and the Utne Reader.

Whoa, hey! Governor, the next subscription is on us.

*Note: This section has been edited to clarify that Hightower was not personally implicated in the ethics lapses.