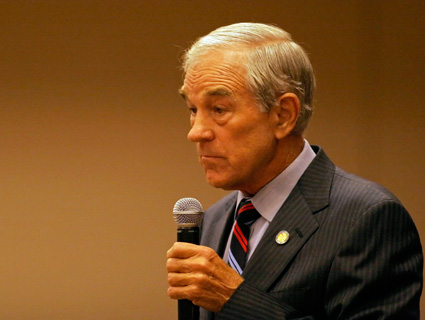 On a gritty street in Galveston, Texas, a few blocks from the Gulf of Mexico, stands a prime example of the largesse of Republican Rep. Ron Paul. Workers here are putting the finishing touches on a new home, one of about 180 that will be built, at taxpayer’s expense, for residents who lost their abodes to Hurricane Ike back in 2008.

The money for this project came from a federal Community Development Block Grant that the libertarian-leaning congressman helped direct to Galveston, the seat of Galveston County, and the most populous part of Paul’s district. “Federal dollars are key,” city spokeswoman Alicia Cahill tells me as a trailer arrives with boxes of new appliances. “Not only to help rebuild these homes, but also for so many infrastructure projects.” 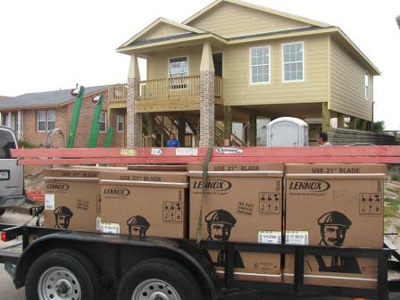 Thanks for the digs, America! Photos by Josh Harkinson

As a libertarian, Paul says he opposes federal disaster relief, but one of Paul’s staffers told me that his office has shepherded hundreds of FEMA claims, ensured the reconstruction of the county’s seawall, and won federal funding for an extensive beach nourishment project. Indeed, between 1999 and 2009 (the most recent year available), federal spending in Galveston County quadrupled to more than $4 billion. In 2009, the county received $14,707 per resident, topping average per capita federal spending in 46 of the 50 states. Paul earmarked some $60 million for projects in and around the city that year.

These local projects illustrate a central irony of Ron Paul’s career: Even as the 12-term congressman has become the Cassandra of governmental overreach, he has enabled a deepening dependence on the federal government at home. Paul, who last week announced that he will retire at the end of 2012, will on one hand be remembered as “Dr. No,” the politician who always voted “nay” on new spending, and on the other, as “a politician like all the rest,” as Galveston GOP precinct chair Josh Daniels described him to me last week, noting that Paul’s Janus-faced approach to federal spending “just doesn’t sit well with me.”

For better or worse, Paul has always cauterized his anti-government views with old-fashioned cronyism. Knowing that most appropriations bills will pass despite his nay vote, he often loads them with earmarks. In this way, he has managed to please both small-government conservatives and pork-loving constituents. From 2008 through 2010, Paul won nearly $125 million in earmarks, most of them for spending in his district. Last year, he was one of just four House Republicans who refused to abide by their party’s voluntary earmarks ban. Trying to justify his projects in a 2009 Fox News interview, Paul said, “If they are going to allot the money, I have a responsibility to represent my people.” Asked to elaborate on Paul’s position, his spokeswoman pointed to a statement on Paul’s website arguing that eliminating earmarks “would further consolidate power in the already dominant executive branch and not save a penny.” 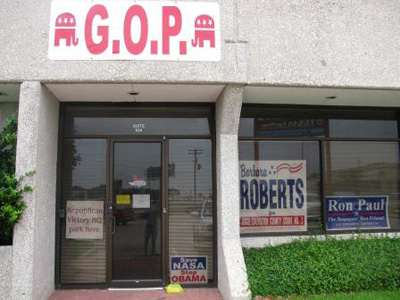 Welcome to Galveston County GOP headquarters.Over the years, being Ron Paul has not gotten any easier. Take, for example, the window of the Galveston County GOP headquarters, a squat building along Interstate 45 south of Houston, where a campaign sign reads, “Ron Paul: The Taxpayers’ Best Friend.” Less than a block away is the site of a future Park and Ride facility, courtesy of Paul’s $750,000 earmark—never mind that Paul claims to oppose public transportation. Of course, Paul isn’t entirely a hypocrite. He has long advocated privatizing NASA, a major employer in Galveston County. Obama is now doing just that; the only problem is that there’s another sign in the window of GOP headquarters, reading: “Save NASA, Stop Obama.”

For Paul’s would-be successors, inhabiting his political wheelhouse is about as desirable as living on Saturn. None of the Texas Republicans vying to replace him in Congress—school administrator John Gay, politically connected attorney Michael Truncale, and state legislator Larry Taylor (who on Wednesday announced he would drop out of the race)—consider themselves libertarians. When I met Truncale at a GOP social hour at a yacht club in Kemah, an affluent resort town on Galveston Bay, he told me that a number of Paul’s positions “may be a bit extreme for me.” And Gay gripes that Paul wants to shrink government to the point that it’s “almost like no government.” In fact, nobody I met at the club described themselves as full-fledged Ron Paul supporters.

Part of Paul’s duality may stem from his district’s shifting political landscape; this year, the Texas Legislature redrew the district to include a swath of Democratic-leaning Jefferson County and larger parts of Galveston County. Paul’s turf, once predominately rural, now must draw more conservative votes from the metastasizing Houston suburbs around League City, where billboards advertise new subdivisions with names like Tuscan Lakes and Trails at Bay Colony. Many voters in those places look to the government to provide quality roads, public schools, and law enforcement. “Growth in League City is mainly Republicans,” says Daniels, the Galveston County precinct chair. “A lot of the core libertarian voters are not in that district.”

“He’s just not that popular around here,” says a resident of Paul’s old neighborhood.

To be sure, Paul still has plenty of loyalists. At Smithart’s Downtown Grill in Lake Jackson, where he used to stop in for the signature half-pound burger, I found Sandra Smithart standing barefoot behind the counter, her toenails painted bright red. She told me that everyone knew Paul because, in his former career as a physician, he’d delivered thousands of babies around the county. “I like his honesty,” she said, after calling out an order for a big man named Bubba. “He’s a politician who won’t ever vote for anything he doesn’t believe in.”

Yet on the leafy streets around Paul’s old ranch-style home, yard signs in support of his presidential campaign were hard to come by. “He’s just not that popular around here,” explains retired engineer Jim Struthwolf, stepping off his riding mower to talk. Though Struthwolf has seen Paul speak at the Lions Club and his wife worked with Paul’s wife on the Girl Scouts 20 years ago, he doesn’t consider himself a supporter. “He went off a different way when he became a libertarian.”

If all politics are local, as the famously liberal House Speaker Tip O’Neill liked to argue, then the Ron Paul revolution may be destined to fizzle. Back home, Paul never fully walked his libertarian talk. Struthwolf recalls Paul’s early days in Congress, when he lambasted O’Neill for riding around Washington in an expensive, state-issued Lincoln Town Car. Well, the last time Paul showed up at his house, Struthwolf tells me with a chuckle, he showed up in, yes, an official Lincoln Town Car. (Paul’s spokeswoman said the car could have belonged to someone else). “Tip O’Neill,” Struthwolf says, “is probably laughing in his grave.”