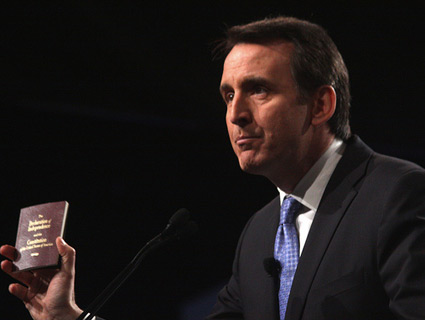 As Minnesota’s governor, Tim Pawlenty earned a reputation for his prodigious use of veto power. In 2008, he even set a state record by out-vetoing all of his predecessors. Even so, one bipartisan bill he killed stood out, shocking even members of his own party.

The legislation, which passed the Minnesota Legislature in May 2009, was intended to curb bullying in public schools. Specifically, the measure would have required school districts to train staff to address bullying and harassment. The bill was supported by a host of education groups in the state, as well as gay rights activists and advocates for the disabled. It had gained unexpected momentum following the highly publicized death of an 11-year-old Massachusetts boy, Carl Joseph Walker-Hoover, who’d hanged himself in April 2009 following months of intense bullying by kids who thought he was gay.

Pawlenty had initially promised to sign the bill, with some modifications. But after months of haggling over small details, and dragging out negotiations, Pawlenty abruptly vetoed the bill. According to the Minnesota Independent, he said the bill was unnecessary, duplicating “current law relating to school board policies prohibiting bullying, intimidation, violence, and pattern of harassment in schools.” In fact, the bill would have added 14 different student characteristics that the new anti-bullying training would be required to address, including sexual orientation and gender identity.

Pawlenty’s surprise veto deeply angered the advocates who’d pushed for the bill’s passage—but the governor was playing to a different crowd: the religious right. Religious conservatives fought Minnesota’s anti-bullying bill—as they have similar measures—on the belief that it would lead to an incursion of the “homosexual agenda” in public schools by giving new protections to gay and lesbian kids.

After the veto, the conservative Minnesota Family Council declared victory in an email to supporters, according to the Minnesota Independent, writing that that the bill “gives preferential treatment and status to homosexuals, bisexuals, cross dressers, transvestites and transsexuals—persons who have sex change operations—by singling out sexual orientation and gender identity or expression for special protection. Homosexual activists will use it as ‘leverage’ to promote acceptance and normalization of homosexuality, homosexual marriage and unhealthy sexual behaviors.”

“It was pretty disgraceful his action because he completely violated his word in vetoing it,” says state Sen. Scott Dibble, one of the bill’s sponsors.

Up until his veto, Pawlenty’s office had assured supporters that the bill had been altered to meet every one of the governor’s requests and requirements. “It was pretty disgraceful his action because he completely violated his word in vetoing it,” says state Sen. Scott Dibble, one of the sponsors of the bill. “He even pulled out the rug under members of his own party who’d promised to vote for it knowing he’d sign it.”

Dibble had seen such turnarounds before. When Pawlenty was in the state legislature in 1993, Dibble points out, he’d voted for an anti-discrimination bill that updated Minnesota’s human rights statutes to ban discrimination based on sexual orientation. “The first thing he did when he ran for governor was to back away from that,” Dibble says.

To Dibble, the anti-bullying veto telegraphed Pawlenty’s future political ambitions. Other observers of Minnesota politics also view the veto as Pawlenty’s opening move for the 2012 presidential campaign, where the evangelical vote plays a far bigger role than it does in Minnesota.

“My guess is that he was probably looking forward to the presidential race, and the about-face was an attempt to move him in the direction of the religious right that is very concerned about any legislation that might be viewed as pro-homosexual,” says Steven Schier, a political scientist at Minnesota’s Carleton College. He says that the veto was an early indicator that Pawlenty wasn’t interested in running for a statewide office. Otherwise, he probably would have supported the bill.

Pawlenty’s veto still infuriates Tammy Aaberg. Her openly gay, 15-year-old son Justin was relentlessly bullied at school due to his sexual orientation. Last summer, he killed himself—part of a troubling wave of suicides that earned Minnesota’s largest school district a designation by public health officials as a “suicide contagion area.” Last week, the Southern Poverty Law Center filed suit against the district alleging that it has perpetuated an anti-gay climate that violates the constitutional rights of LGBT students.

Aaberg says she can’t help but wonder what would have happened if Pawlenty had signed the bill, forcing Minnesota schools to take bullying more seriously two years ago. “Part of me gets really upset about that, because things might have been better for kids in schools,” she says.