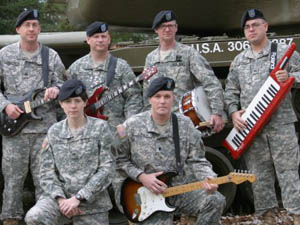 The military has used music to project pomp and boost morale since the American Revolution. Yet with American soldiers scattered across the globe, the days of marching bands following the troops into battle are all but over. As one of the authors of a new Army band field manual told the New York Times, “If it can’t fit into two Blackhawks, it’s not going to happen.” That means deploying some of the 4,600 members of the more than 100 Army, Army Reserve, and Army National Guard bands to perform in “popular music elements” or “music support teams”—what civilians know as rock bands.

There are no fewer than two dozen official Army rock bands, with names like Show of Force, Gunpowder and Lead, Down Range, Night Fire, the Loose Cannons, Controlled Detonation, Sandstorm, 5-Star, and Burned Aftermath. They mostly play in uniform, performing covers of everything from classic rock to hip-hop. (They occasionally get to hang out with real rock stars like Gene Simmons.) In addition to entertaining the troops, the bands are also sent on recruitment tours: The Pentagon has clearly realized that teens would rather listen to Cee-Lo than Sousa.

Below, 10 videos of Army combat rock bands (and a couple of Marine and Navy ones) in action:

skArmy: What, Shock and Ska was already taken? Actually, the 300th Army Band’s resident ska group plays a pretty catchy version of A-Ha’s “Take On Me.”

Arctic Groove Orchestra: Based in Alaska, the rock band of the 9th Army Band wants you to know it “does NOT play the national anthem.” It does play OK Go covers, however:

Four Horsemen of the Arockalypse: A metal outfit attached to the Task Force Marine Band that has entertained soldiers in Iraq. Warning: May burst your eardrums.

The Woodchucks: The curiously named rock band of the 399th Army Band is not afraid of more cowbell.

The Volunteers: Drawn from the prestigious United States Army Field Band, the Vounteers are considered the service’s “premier touring pop/rock band.” Here, they kick off a promo clip from their Iraq tour with Ozzy Osborne’s “Crazy Train.”

High Altitude: This clip of the 4th Infantry Division Band‘s rock ensemble playing “I Will Survive” at a mall in Bahrain is a bit shaky, but is worth watching just for the enthusiastic fans. All two of them.

Recoil: In this clip, the 77th Army Band‘s in-house rockers do a cover of Gnarls Barkley’s “Crazy.”

Tuff Boxx and the Baghdad Horns: And to close things out, check out the guitarist from this Iraq-based ensemble of the 56th Army Band as he shreds the solo from “Freebird.”