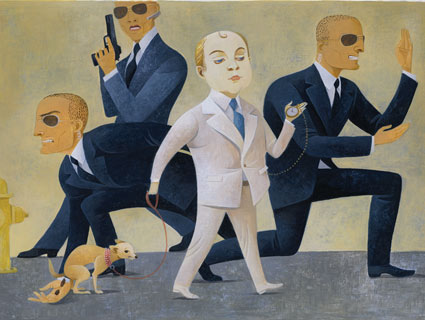 The Primary, tall and flinty with a graying goatee, has decided he’s in the mood for shopping, a development that’s got David Perez all worked up. I’m sitting with Perez in a Chevy Silverado in downtown Santa Monica. A fit ex-Marine, Perez is in charge of the Primary’s six-man protection detail. For 20 minutes, we’ve been waiting around in a grocery store parking lot, but now the Primary has parked his Porsche 911 Carrera at a shopping strip nearly a mile away. Though Perez already has three “countersurveillance” experts on the scene, he’s antsy to join them. His client has a stalker, whom one of the team members had spotted earlier. The Silverado crawls through glacial traffic. “You’re driving like an old lady!” Perez barks. “Catch the green!”

Perez and his partner Mike Gomez, a bodyguard resembling The Sopranos’ Silvio, finally track down their client at a Barnes & Noble. Two of the countersurveillance guys go back to scouting for menaces, while Perez and Gomez, both of whom are trained sharpshooters and martial-arts experts, step in as the Primary’s “close protection” team. Shoppers stare at the entourage, straining to recognize someone famous.

The men form a barrier around their client as he stops to watch a street-magic act, browses racks at Armani Exchange, wanders in and out of a Hooters and past a Gap. And that’s when everything goes haywire. The stalker sprints around a corner, trailed by one of the countersurveillance guys. He lunges at the entourage. Gomez wraps the Primary in his beefy arms and yanks him away. The other agent intercepts the assailant mid-lunge and pins him against the wall with his elbows. “He’s out of play,” says the Primary. The agent and the stalker untangle their arms and laugh.

The entire scenario was a training drill staged by the World Protection Group Inc., an executive protection company with offices in Beverly Hills, New York, and Mexico City. The man playing the Primary, not a real CEO but a former Secret Service agent and narc, asked that I not use his name because, he says, he often works undercover in Mexico. Earlier that morning, he had lectured a group of trainees—WPG employees and freelancers shelling out $575 for the session—about the wide, wide world of corporate security: “You are going to find yourself in places six months or a year from now that you never thought you would get to,” he said. On a screen behind him, a well-dressed couple strolled from a Learjet to a Jaguar, framed by a neon sunset.

There are no reliable numbers on the growth of executive protection (EP), but the experts I spoke with say it has expanded at a rapid clip since the 1980s, with dozens of new players breaking into the game. That happens to be the same period during which the top 1 percent of US earners nearly tripled their annual income (PDF). More than a few of them, it seems, have felt compelled to hire men with guns.

I sat down with Kent Moyer, WPG’s founder and CEO, in his cramped office. Moyer is trim, balding, and middle-aged. He got into private security back in the early ’90s, serving a five-year stint as a bodyguard for Hugh Hefner at the Playboy Mansion. “I could write a book on just the things that I saw,” he told me, “but I get paid not to write that book.” He was hired, he says, because he could knock heads; he’d placed fourth in the International Okinawan Goju-Ryu Karate-do Federation championship and later trained with Steven Seagal in aikido. For a while, he played B-movie villains, like a neo-Nazi in 1994’s Femme Fontaine: Killer Babe for the CIA.

Moyer quickly learned that protecting Hef was less a matter of brawn than of discreet surveillance and detailed planning. By the early aughts he’d launched WPG, with a top Hollywood talent agency as his first client. The collapse of the World Trade Center towers proved a boon for executive protection; soon after, WPG began landing corporate clients, and sales shot up by 40 to 50 percent.

Like most security professionals, Moyer won’t name his clients. About 20 percent are celebrities and entertainers, he says, while the rest are wealthy individuals and corporate executives. The firm has protected senators, congressmen, former secretaries of state, and members of the Saudi royal family. As the business grew, Moyer took some time off to attend Wharton’s Advanced Management Program. Executive protection “is about more than sending an off-duty cop out with a gun,” he explains. “If it came to any kind of semi-organized attack, those guys would get dead real quick, because they don’t have any kind of game plan.”

In 2009, EP firms discovered a powerful marketing tool in the outrage over bank bailouts. “There has never been this kind of populist anger before,” Eden Mendel, director of security consulting at Kroll, a risk advisory firm, told the Financial Times. “When executives are revealed on television with bonuses they become a target.” Nearly 80 percent of executives polled by the American Society for Industrial Security agreed that “the need for security has increased in the current economic climate,” with “general increases in crime” and “employee layoffs” cited as the biggest threats. Executive protection firms like WPG, 360 Group International Inc., and the Steele Foundation reported revenue spikes of 30 to 50 percent in 2009, despite the recession. “Our business gets better as the economy gets worse,” Moyer told me.

The protection boom shows no sign of abating, despite a weaker-than-expected feedstock of anarchy—violent crime in the United States is at its lowest level in decades. Workplace violence, too, remains in a steady decline, says Eugene Ferraro, founder of a security consultancy called Business Controls Inc., which manages workplace-safety hotlines for 23,000 clients. “An executive who has ever really been confronted and their life threatened? That’s kind of hard to find,” he adds.

So why have top execs (and/or their boards) become such security nuts? One factor involves the need to do business in the developing world—WPG claims it can provide services in 70 countries—but that doesn’t explain the domestic demand. Ferraro chalks it up to paranoia. “I get the calls,” he says. “They say, ‘Oh my God, I read an article in the Wall Street Journal, the sky is falling!'” The tendency of business leaders to “think over the horizon and anticipate problems” is causing them to act like they’re in Mexico City or Baghdad, Ferraro says. Besides, why not play it safe when shareholders are picking up the tab? Since 2006, when publicly traded companies began disclosing corporate perks, spending on CEO security has increased an average of 15 percent a year. (Michael Dell‘s compensation package, for instance, includes $1.2 million for security.)

Another big part of EP’s appeal might simply be executive convenience. Protection firms claim that they can save executives an average of 90 minutes a day by conducting “advances” of venues, having cars and elevators waiting, and thwarting unwanted advances from employees, media—whomever. “The neat thing is that we’ve worked all this stuff out for you,” Moyer says. “You don’t have to worry about it.” If the Primary needs his Starbucks fix, he’s likely to sit in a locked car checking email while his protector fetches a Grande.

Moyer prides himself on allowing the hoi polloi to vent their frustrations after being refused an audience with the client. “Even if you are not going to let them meet with your principal, I sit down and talk to them,” he says. “That is sometimes all people need.” But occasionally it can be hard to know whom to admit into a client’s inner orbit. While on the job not long ago, Gomez moved to stiff-arm a thuggish-looking man—it was Jeff Zucker, then president of NBC Universal.

At WPG’s training day, Gomez got a second chance to test his power of discernment. Back on Santa Monica’s crowded Third Street Promenade, the Primary didn’t seem to recognize a smiling man who approached, claiming to know him. Gomez raised his arms to keep the man away, but it was just a diversion. From another part of the crowd, two attackers hurled themselves at the Primary. The agents sprang to meet them with palm jabs and elbow thrusts. Sunglasses were smashed, a cellphone was sent clattering, and bodies hit the pavement as shoppers gawked. Then the men got up and shook hands—the Primary was untouched.

Off to one side, a frail street person was taking it all in. “Hey guys,” he beckoned to the pumped-up team members as they headed off to grab lunch. “Can I get you to give a dollar to save the hungry people of Los Angeles?”