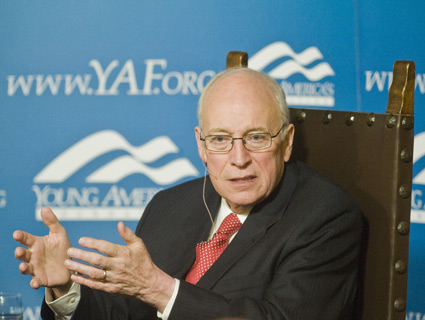 Here we go again, more Plamegate revisionism. But the latest practitioner is no surprise: Dick Cheney.

In his new memoir, In My Time, the former vice president (with an assist from coauthor/daughter Liz Cheney) serves up a self-serving and selective account of the episode that rocked the White House (his office, in particular) and that nearly sent one of his closest aides to the hoosegow.

The controversy centered on 16 words President George W. Bush spoke during his January 28, 2003, State of the Union speech: “The British government has learned that Saddam Hussein recently sought significant quantities of uranium from Africa.” This was one of the key arguments the White House was then presenting in public to bolster its case that Saddam Hussein was neck-deep in weapons of mass destruction and an invasion of Iraq was damn-well necessary. But for months, the CIA and State Department analysts had investigated reports of Saddam’s supposed uranium-shopping in Niger—which were based in part on suspect documents—and had found no compelling evidence to back up the allegation. Some intelligence analysts had concluded that such a deal not only had not happened but also could not have occurred. The CIA had made certain to remove references to the Niger charge from earlier Bush speeches, but the White House kept trying to squeeze this claim in—and eventually succeeded.

As part of its examination of the Niger allegation, the CIA in February 2002—responding specifically to a Cheney request for more information on this topic—sent former Ambassador Joe Wilson, an Africa expert with good contacts in Niger, to sniff around; he returned with the observation that a Niger-Iraq uranium connection was highly unlikely. And on June 17, 2003—months after the invasion occurred and no WMD or nuclear bomb program were found—the CIA produced a memo reporting, “Since learning that the Iraq-Niger uranium deal was based on false documents earlier this spring, we no longer believe that there is sufficient other reporting to conclude that Iraq pursued uranium from abroad.”

In his book, Cheney doesn’t mention the CIA’s conclusion. Instead, he refers to a British investigation that found that the British government had “intelligence from several sources” indicating there was a basis for the Niger accusation. Ignoring the US intelligence community’s own reporting—as he seeks to revive this long-discredited claim—Cheney rails that the Bush White House had been dumb to acknowledge that the inclusion of the Niger accusation in Bush’s speech had been inappropriate. And he insists it was a boneheaded move to admit a mistake: “Mistaken soon evolved into lied.” Cheney’s version—overlooking the US intelligence establishment’s finding—reveals the Cheney method: recognize no wrong, for that only gives your foes ammunition.

The ex-veep is clearly not concerned with being fair-minded, let alone accurate. As he continues his score-settling rendition of this episode, he commits another glaring omission that shows he’s cherry-picking facts for his own benefit.

Cheney lashes out at former Secretary of State Colin Powell and his then-deputy Richard Armitage, fingering them as the true culprits in the Plamegate scandal. He notes—accurately—that Armitage was the first administration official who told conservative columnist Bob Novak that Wilson’s wife worked at the CIA on WMD and had been involved in sending Wilson to Niger. (In our book, Hubris: The Inside Story of Spin, Scandal, and the Selling of the Iraq War, Michael Isikoff and I identified Armitage as Novak’s source.) Novak’s column outing Valerie Plame Wilson as a CIA operative sparked the scandal, for it raised the possibility that administration officials had broken a law prohibiting the release of information that identifies undercover CIA officers (which Valerie Wilson had been). The subsequent investigation ended up charging Scooter Libby, Cheney’s chief of staff, with perjury and obstruction of justice.

In his book, Cheney hits the warpath, decrying Powell (who learned about Armitage’s leak to Novak) and Armitage for not telling the world and the White House about Armitage’s role, claiming they could have ended the scandal at the start. Cheney recalls an October 2003 Cabinet meeting when Bush, at its conclusion, told reporters that he didn’t know who had leaked Wilson’s CIA identity “but wanted the truth.” Cheney adds, “Thinking back, I realize that one of the few people in the world who could have told him the truth, Colin Powell, was sitting right next to him.” (Powell had quickly informed the Justice Department about Armitage’s conversation with Novak—which did not end the probe.)

But there was another person who could have told Bush about the leak, and Cheney does not mention him once in his retelling of the Wilson affair: Karl Rove. Cheney leaves out the critical fact that Rove, Bush’s chief adviser and strategist, was Novak’s second source for the Wilson leak. Rove did not share that pertinent information with his White House colleagues, and he even allowed the White House to officially declare that he was “not involved” in the leak. (In Rove’s own self-serving memoirs, he recounts that at some point he told Bush that he had been one of Novak’s sources. How did Bush react? According to Rove, “Bush sounded a little annoyed.” And that was it.)

Cheney airbrushes Rove out of the picture. Nor does he acknowledge that Rove’s dissemination of information about Valerie Wilson to two reporters (Novak and Matt Cooper, then of Time) had been part of a campaign orchestrated by Cheney’s office—and managed by Libby—to discredit Joe Wilson, after Wilson wrote a scathing New York Times op-ed contending that Bush and Cheney had pushed a phony case for war. In fact, Armitage knew about Valerie Wilson because Libby, looking for material to deploy against her husband, had leaned on the State Department for information on Joe Wilson’s mission to Niger. Libby, too, had discussed Valerie Wilson with two reporters (Cooper and Judith Miller, then of the New York Times). That’s another fact Cheney sidesteps.

It’s not shocking that in Cheney’s telling, Libby, his loyal lieutenant, was no more than an innocent bystander sideswiped by a runaway investigation caused by a cowardly Powell and a guilty Armitage. To protect Cheney (and presumably distance the vice president from the White House’s get-Wilson crusade), Libby had lied to FBI agents about how he had come to learn of Valerie Wilson and her CIA position, and a jury found the evidence against him convincing. Yet Cheney claims that nothing untoward transpired and that Libby had merely experienced “a faulty memory.” Cheney suggests that Bush, who commuted Libby’s prison term, failed the guts test by declining to pardon Libby at the end of his presidency.

In his memoir, Cheney is not experiencing faulty memory; he is photoshopping history in the most heavy-handed manner. But that’s appropriate. The Wilson scandal was a microcosm of the larger tale of the administration’s use of false information and misrepresentations to guide the nation to war in Iraq. Cheney, Libby, Rove, and their allies always knew this. And with this new book, Cheney is again trying to beat back the judgment that he and Bush dishonestly pitched the case for the Iraq war. Yet his retelling of the smaller story of the CIA leak affair is proof he remains an unreliable source.