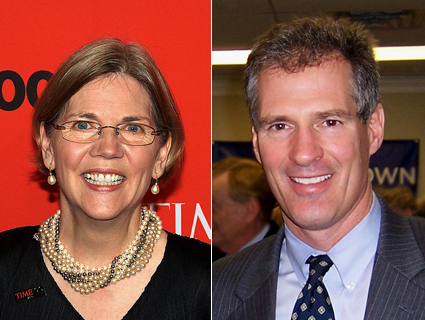 Speculation has been mounting for a while now, but on Thursday Elizabeth Warren appears to have made it official: She intends to challenge Sen. Scott Brown (R-Mass.) in 2012. The Harvard professor and architect of the new Consumer Financial Protection Bureau has launched a website for her exploratory committee, the likely prelude to a full-scale campaign.

Warren rose to national prominence when President Obama tapped her to run the Congressional Oversight Panel monitoring the TARP bailout in 2009. When the 2010 Dodd-Frank Wall Street reform bill created a Consumer Financial Protection Bureau—an idea that Warren first developed—she was considered the obvious choice to head the agency. Obama tasked Warren with implementing the new agency, but she quickly became a right-wing target and Obama ultimately nominated former Ohio Attorney General Richard Cordray for the post.

Brown, who pulled off a stunning upset of Massachusetts Attorney General Martha Coakley in 2010 to replace the late Sen. Ted Kennedy, is one of the Democrats’ biggest 2012 targets. And Warren, with her reputation as an anti-Wall Street crusader, has been floated as a dream candidate since the day Brown was sworn in. As Glen Johnson noted, Warren has already staffed up in advance of a run, and picked up the support of a third-party fundraising outfit based out of Washington.

So can she win? Well, she’ll first have to navigate a crowded Democratic primary which includes Newton mayor Setti Warren (no relation), City Year founder Alan Khazei, and (possibly) Rep. Michael Capuano. Brown, for his part, remains quite popular in Massachusetts, although with Obama on the ballot and an opponent who’s willing to shake hands outside Fenway Park, that could change.

Earlier this week, Brown previewed his likely line of attack against Warren, noting in a fundraising email this week that “They are so obsessed with winning this seat back that Washington elitists are trying to push aside local Democrat candidates in favor of Professor Warren from Oklahoma.” (Warren has lived in Massachusetts for two decades.)