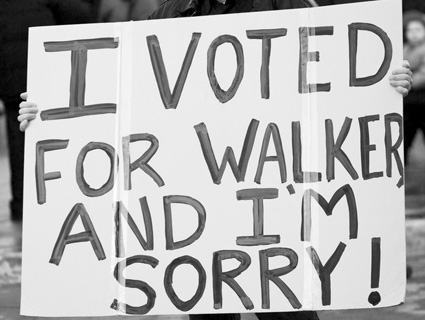 Never before in American politics have voters recalled more than two state legislators in a single year. That record could be broken on Tuesday, when Wisconsinites vote to decide the fate of six Republican state senators who voted for Gov. Scott Walker’s conservative, anti-union agenda. Democrats need to win three of these recall races (and defend two more in another round of recalls next week) to reclaim a majority in the state Senate and throw a wrench into Walker’s political machine.

Publicly, Wisconsin Democrats are oozing confidence. Mike Tate, chair of the state party, told reporters last week that internal polling showed Democratic challengers ahead in three races and tied in the rest. Jessica King, who is running to unseat GOP Sen. Randy Hopper in District 18, has predicted that Democrats would win all six races.

But in private, representatives of left-leaning groups are biting their nails about the razor-thin margins separating Democrats and Republicans in several of the races. These officials, who requested anonymity so they could speak candidly, strongly believe Democrats will claim at least two seats. Three races are too close to call, and they’re writing off another as all but impossible.

Here’s a breakdown of the six recall races, starting with the ones progressive insiders think Democrats are most likely win.

Kapanke, who represents the LaCrosse area in southwest Wisconsin, is the only GOP senator hailing from a deeply Democratic district. The conventional wisdom among pollsters and political scientists is that victory is all but assured for Schilling, who was elected to the State Assembly in 2000. Polls have consistently shown Kapanke trailing by double digits in his recall race, including a Daily Kos poll from late June that put Schilling ahead by 14 points.

Kapanke knows he’s in deep trouble. Secretly recorded at meeting of LaCrosse Republicans meeting in June, Kapanke said he hoped the government workers in his district—and there are lots of them, he stressed—”are sleeping” on election day. He mused grimly: “We could lose me. We could lose Randy Hopper in the 18th or Alberta Darling over in…the 8th,” adding, “If [the Democrats] gain control of the Senate, it might be over for us.”

In 2008, Hopper defeated King in this traditionally Republican district by a mere 163 votes. “That’s just 82 voters—that’s it,” King told supporters at a recent rally. “It comes down to who gets out the vote.”

This time around, King heads into election day with as much momentum as she could hope for. The 18th may lean to the right, but it also boasts the most public workers per capita outside of Dane County, home of the state capital, Madison. For instance, there are nearly a dozen correctional facilities in the district, and by supporting Walker’s anti-union budget bill, Hopper curbed corrections officers and other prison employees’ compensation and bargaining rights. “I voted Republican my whole life,” says John Eveland, a CO who plans to vote for King. “I feel just absolutely betrayed.”

Betrayal is a theme Hopper knows well. He made headlines in March when protesters arrived at his house to confront him over his anti-union vote. They encountered his wife, who informed them that Hopper had left her for his 26-year-old mistress. She has since joined the recall effort against him. Hopper also helped his alleged girlfriend land a government job with an inflated salary. Safe to say, the controversy surrounding Hopper’s personal life has not helped his chances: An August 3 poll put King ahead by 9 percentage points.

Too Close to Call

In February, Olsen was one of the few Republican senators to question Walker’s attack on collective bargaining and organized labor, calling it “pretty radical.” But in the end, he voted for the budget bill and now faces Clark, a progressive assembly member, in a recall race saturated with vicious, and sometimes plain misleading, radio and TV advertisements.

Left-leaning groups accuse Olsen of backing no-bid sales of state power plants (a claim PolitiFact rated “mostly false”) and wanting to slash Medicare (Olsen argues he hasn’t said anything about the federal program). Meanwhile, right-leaning groups have hyped Clark’s spotty driving record—including an ad with real footage of him hitting a bicyclist in a Madison intersection—while ripping the Democrat for not paying child support. So dirty is the race that Clark pushed Olsen to sign a pledge requiring outside political groups, who’ve funded many of these ads, to tell the truth or at least unmask their donors. (According to the Wisconsin Democracy Campaign, most conservative groups trying to influence the election are not disclosing their funders.)

Early polls showed Clark leading Olsen by a few points, but in recent weeks, that slim lead has evaporated, leaving the two in a statistical dead heat.

Darling, chair of the powerful Joint Committee on Finance, was Scott Walker’s top ally in the state Senate, helping to craft the governor’s controversial budget-repair bill. Of the six Republicans facing recalls, Darling, a 20-year Senate veteran, was considered the least likely to lose.

However, Pasch, a Democratic assemblywoman, has closed the gap with Darling, transforming herself from an also-ran into a serious contender. A Democratic poll from July showed Pasch with a one-point lead over Darling, which would have been unthinkable just a month earlier.

The Darling-Pasch race has been characterized by mud-slinging on both sides. After Republicans accused Pasch of coordinating with a third-party progressive group named Citizen Action of Wisconsin, Democrats fired back by filing an official complaint against Darling, accusing her of plotting with right-wing groups including the Club for Growth and the influential anti-abortion outfit Wisconsin Family Action. It remains to be seen whether the political one-upmanship will tilt the race either way. Democratic officials say that Tuesday’s outcome is essentially a toss-up.

Harsdorf, a 23-year veteran of the state legislature, goes into Tuesday with the most valuable trait any candidate can hope for: name recognition. The Harsdorfs are a political institution in the 10th District, which borders Minnesota’s Twin Cities.

Democrats say it will take a Herculean effort on the part of Moore, a union organizer, to oust Harsdorf. A Democratic poll showed Harsdorf and Moore in a “dead heat” in late July, but party officials aren’t optimistic that they can overcome what’s sure to be a last-minute push from conservative outside groups to bump Harsdorf over the finish line on Tuesday.

Cowles, a 24-year veteran of the state Senate, is largely considered the strongest Republican in the recall elections. He is the only Republican facing recall to be endorsed by the League of Conservation Voters. He’s known for moderate stands such as supporting the extension of jobless benefits. Polls show him tied with Nusbaum, the former mayor of DePere. Democratic officials say they believe Cowles doesn’t face a serious challenge and will cruise to victory.