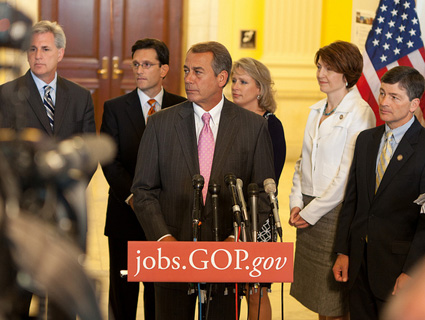 As soon as the ink was dry on the new debt-ceiling deal, House Speaker John Boehner (R-Ohio) was on Twitter pushing the GOP’s “blueprint” for creating jobs and fixing the economy. There’s a special new jobs website set up to promote the Republican plan. I was pretty sure that I knew what it was even before I looked at it, but Boehner’s tweets were pretty insistent, so I decided to check out the plan. As it turned out, the fancy new website simply promoted the same old “jobs” plan my colleague Andy Kroll wrote about back in May. But since that was a lifetime ago in Washington, here’s a refresher on what the GOP wants to do now that the debt fight is over:

Number one on the list of “pro-growth” policies House Republicans intend to push is reducing “regulatory burdens” on small businesses. The GOP plan highlights a number of regulations that hurt “job creators,” including the EPA’s efforts to regulate greenhouse gasses; the FCC’s net neutrality proposal, which is hated by the nation’s biggest telecom monopolies; and “burdensome pesticide regulation.”

Next on the list is…. lower taxes. House Republicans are promising to lower the tax rate for individuals and businesses to 25 percent, down from the current 35 percent. How that squares with the other GOP proposal to tackle the national debt isn’t laid out in the plan. Presumably the big tax reduction will spur so much growth that the revenue will magically appear in the federal treasury, just the way it did, uh, with the Bush tax cuts. (It didn’t.)

The GOP’s other ideas include patent reform (which Congress actually passed since the last version of the plan was released) and “expediting” the drug approval process at the FDA. And no GOP jobs plan would be complete without a proposal to drill, baby, drill, to increase domestic energy production.

Critics can laugh all they want about Obama going on a bus tour to focus on job creation, but even if all he does is wrangle up some money to fix a few falling-down bridges, it’s likely to put more average people to work than anything the GOP has in mind.