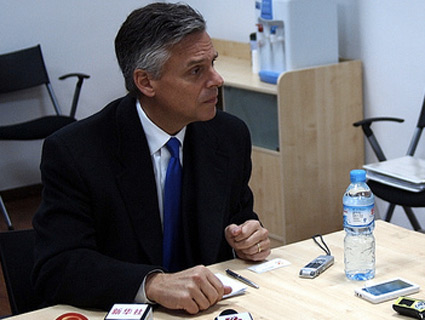 John Weaver, the chief strategist for Republican presidential hopeful Jon Huntsman, was just saying aloud what we were all surely thinking: Rick Perry sure doesn’t know squat about science. Weaver had some rather uncharitable words for the newest addition to the GOP presidential field in an interview with the Washington Post on Wednesday, this time about the Texas governor’s denial and conspiracy theories when it comes to climate science.

Here’s the Weaver quote (emphasis my own):

“We’re not going to win a national election if we become the anti-science party,” John Weaver…said in an interview Wednesday. “The American people are looking for someone who lives in reality and is a truth teller because that’s the only way that the significant problems this country faces can be solved. It appears that the only science that Mitt Romney believes in is the science of polling, and that science clearly was not a mandatory course for Governor Perry.”

Huntsman, meanwhile, has more than once accentuated his modest climate change bona fides. His staff has shown little apprehension about going after Romney’s record as Massachusetts governor, so as Perry picks up more steam on the campaign trail, one can reasonably expect similarly strong criticism of Perry’s questionable economic claims and his ultra-conservative brand.

With Weaver’s statement, the Huntsman camp continues its attempt to distance their candidate from hardline right-wing positions. Along with his acceptance of the reality of anthropogenic climate change, Huntsman has also openly expressed his respect for the president, his support for same-sex civil unions, his sympathy for more dovish foreign policy, and other things deemed anathema by his Republican rivals.

Unfortunately for Huntsman, there seems to be “no demand for Huntsman’s brand of moderation in today’s GOP,” as Jacob Weisberg notes in his Vogue profile of the candidate, published online Thursday. But is there a larger, long-term strategy at play here? It is widely acknowledged that his comparatively centrist positions give Huntsman a lump-of-Cherry-Garcia-in-Hades’ chance of locking down the 2012 Republican nomination. Thus, his run serves to highlight his qualities as a moderate Republican unlike the current leaders of his party. It may be wishful thinking, but perhaps his strategy is to wait it out until the party burns out on extremists and returns to a more sane equilibrium—at which point Huntsman will be ready and waiting to assume a leadership role.