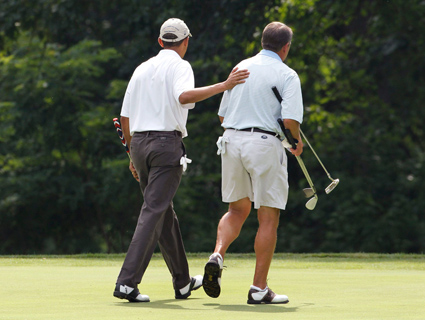 Sometime in the ’50s, the story goes, a small plane ran into engine trouble over Bethesda, Maryland, and was forced to crash-land near the 18th hole of a bucolic golf club. Employees rushed to the scene, and—upon discovering that the pilot was a woman—had her “very gingerly and gallantly” removed from the grounds.

Three decades later, when a visiting head of state showed up at the same golf club with a complement of Secret Service agents, the lone woman among them couldn’t set foot on the property. In 1981, a new Supreme Court appointee with a love of golf and a 12 handicap—Sandra Day O’Connor—became the first justice not to be offered a membership. That same chivalry has since been extended to Ruth Bader Ginsburg and Sonia Sotomayor.

Honorary membership at Burning Tree Club is not to be sneezed at, seeing as how the initiation fee is north of $75,000, plus another $6,000 per year and tips for the caddie. Still, not all male Supreme Court justices in recent years have accepted the club’s offer, though Antonin Scalia did. So did presidents Franklin Roosevelt, Eisenhower, Kennedy, Johnson, Nixon, Ford, and George H.W. Bush. Indeed, according to an encyclopedic 2003 ESPN.com piece by Greg Garber, Ike was persuaded to run for office by fellow club members and subsequently “spent so much time at ‘The Tree’ that a hot line was installed between the White House and the pro shop.”

Barring some Americans from the clubhouse stems from the same part of the cortex as barring others from the lunch counter.

We were moved to take this detour into archaic Washington folkways because of June’s debt ceiling “golf summit” between President Obama and Speaker John Boehner, which, as some reporters noted, took place at the Andrews Air Force Base course because the president couldn’t very well play Boehner’s regular club—Burning Tree.

Deep breath. Okay. It is 2011. Boehner is the speaker of the House. The body that is supposed to, more than any other, represent the people—all the people—of the United States of America. Yet 91 years after women won the right to vote and 40 years after our mothers fought for more than token access to the levers of power, the signal the man second in line for the presidency intends to send to 51 percent of the nation, 40 percent of Republicans, and his own daughters is…well, we’re too ladylike to say.

And yes, intends: The optics of belonging to one of America’s last 24 boys-only golf clubs have been brought to Boehner’s attention many, many times before. Evidently, Neanderthal sexism is simply another thing he refuses to compromise on. 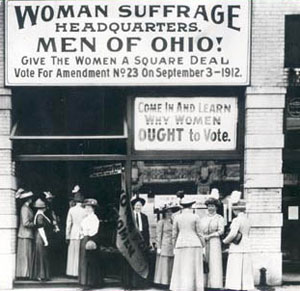 Photo: Library of CongressBut don’t feel left out, guys: The speaker’s contempt is not confined to those of the female persuasion. From the glass ceiling to the debt ceiling, Boehner and the rest of the GOP brass are not only ignoring the needs of the majority of Americans, they are actively flipping all of us the bird. And that is something new.

Back in the innocent days of yore—say, six months ago—a politician who did not at least lip-synch concern for the welfare of the American people in the event of an economic tailspin would have gotten a drubbing in the press and a talking-to from his caucus leader. Now? It’s the caucus leader himself who brutally spells out the priorities: No. 1, says Senate Minority Leader Mitch McConnell, is ensuring that Obama is “a one-term president.” No. 2 is protecting “your [Republican] brand.” That’s right—the reason to worry about a downturn that could kill millions of jobs and wipe out what’s left of our retirement and housing values is that it might interfere with GOP positioning.

Which takes us back to golf. George W. Bush gave up the game after starting the Iraq War. Boehner’s cohorts seem less worried about looking out of touch: Just in the past two years, the speaker’s Freedom Project PAC has spent more than $170,000 on golf, $64,000 at the Naples, Florida, Ritz-Carlton alone!

It’s worth noting here that Boehner doesn’t come to this callousness by dint of entitlement—one of 12 siblings, he was the first in his family to go to college—which makes his constant gestures of fealty to elites all the more striking. His attire the night he told the nation that he was protecting “the jobs and savings of Americans” by setting us on the path to economic calamity? Navy blazer, oxford shirt, kelly-green tie. Preppy Handbook, anyone?

So, note to President Obama: golf summit, sure. But don’t forget that barring some Americans from the clubhouse stems from the same part of the cortex as barring others from the lunch counter. The foundational impulse for both is that fairness matters less than power.

Boehner may be, as the president has said, “a good man who wants to do right by the country.” But it all depends, as a previous president might have noted, on what the definition of “the country” is. In today’s Republican Party, that definition has shrunk to its narrowest point in at least half a century. And that, in the end, is John Boehner’s true handicap.

Want to learn more about the debt ceiling fight? Read David Corn on the Obama administration’s strategy, review our detailed, updated explainer on how we got to this point, and learn why Kevin Drum thinks the deal sucks. Still hungry? Andy Kroll has a great piece on what the deal means for our future.