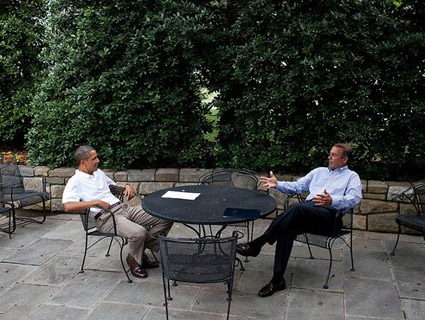 On Monday, with a flick of his pen, President Obama signed the Budget Control Act of 2011, ending a contentious, months-long fight over the nation’s debt ceiling, spending, and taxes that brought the nation to the brink of default and possibly economic catastrophe. You could almost hear the collective sigh of relief as the president turned the lopsided, GOP-friendly bill into the law of the land.

At least we won’t have to go through that again—or so you might think.

Bzzt. Wrong. If you listen to Republicans, you’ll know the debt ceiling fight was just the beginning.

Sen. Mitch McConnell (R-Ky.), in remarks on the Senate floor on Monday, described the Republican tactic of refusing to raise the debt ceiling in order to extract favorable concessions as “a new way of doing business in Washington.” He went on: “One of the most important things about this legislation is the fact that never again will any president, from either party, be allowed to raise the debt ceiling without being held accountable for it by the American people and without having to engage in the kind of debate we’ve just come through.”

Want to learn more about the debt ceiling fight? Read the editors on the real problem with John Boehner, review our detailed, updated explainer for the blow-by-blow of the months-long debt fight, and learn why Kevin Drum thinks the deal sucks. Still hungry? David Corn has a great story on the Obama administration’s political strategy.

McConnell is the Senate minority leader and one of the most influential Republicans in Washington. He shapes GOP strategy in Congress as effectively as any fellow party member. You should believe him when he says that the rancorous fights over lifting the nation’s borrowing limit are here to stay.

The next battle will involve the 12-person “supercommittee” tasked with trimming the federal deficit by another $1.5 trillion. Democrats and Republicans will clash over which lawmakers get named to the committee. Will they be intransigent ideologues or malleable moderates? Although President Obama has repeatedly insisted that future budget changes be “balanced” between spending cuts and new revenues, Republicans will shun the few members in their ranks who could stomach revenue increases. McConnell, an avowed enemy of tax hikes, will pick three supercommittee members. GOPers, he said on Monday, will “make sure that the Republicans who sit on the powerful cost-cutting committee are serious people who put the best interests of the American people, and the principles that we’ve fought for throughout this debate, first.”

The principles that we’ve fought for throughout this debate. Translation: “Read my lips: No new taxes.“

It’s also important to know that the Budget Control Act raises the short-term debt ceiling by just $900 billion. In February 2012, President Obama can request another $1.5 trillion increase in the ceiling, pushing back the next debt battle until early 2013. But that second increase is contingent on Congress approving the supercommittee’s plan or a yet-to-be-written balanced-budget amendment being sent to all 50 states.

You can expect another bout of debt ceiling battling this holiday season as Congress tries to shape the supercommittee’s plan and, later, votes on it. And that’s just in the next five months. After the 2012 election, President Obama or his Republican replacement will have to raise the debt ceiling again, setting up future fights like the one that just ended. So brace yourself: The debt ceiling wars look like they’re just getting started.