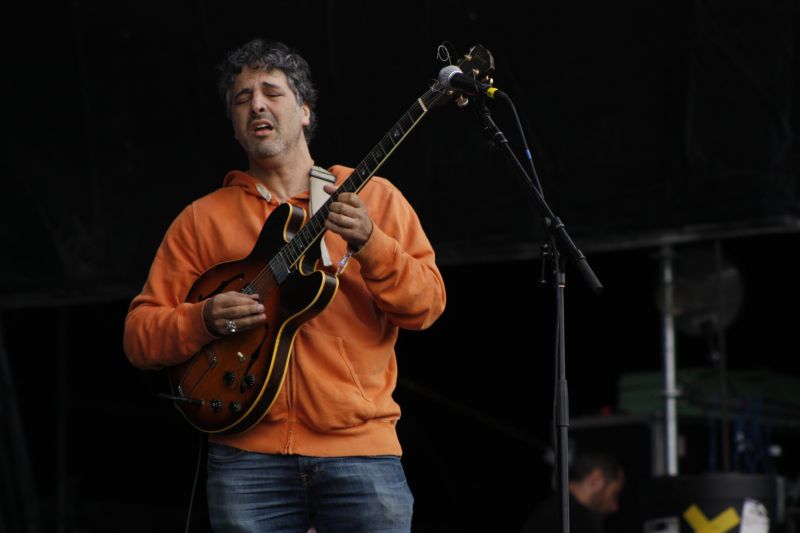 Twenty years ago, guitarist Jonathan Freilich looked around his adoptive hometown of New Orleans and noticed something missing: It wasn’t a booming club scene; the Big Easy had that in spades. It wasn’t a healthy crop of great musicians; no shortage there. No, the deficit he saw was a sense of humor. New Orleanians, it seemed, were thirsty for a good laugh.

“Funny was at a big premium back then,” Freilich tells me backstage after the group’s performance Friday at the Outside Lands music fest in San Francisco. Klezmer music, the raucous Yiddish folk style, was apparently the perfect solution. “The music,” Freilich says, “is kind of funny.”

No argument here: Fans of Gogol Bordello and other klezmer-inspired acts will recognize the frenzied pace and freewheeling melodies that place klezmer high in the running for world’s greatest wild-eyed, maniac dance-party music. Over two decades, the Allstars have got it down pat. The music isn’t funny ha-ha, but something about indeed feels patently silly. Minor keys dominate, but they’re of the tongue-in-cheek variety, as if daring the listener not to crack a smile, grab a dance partner, and swing away. Indeed, it’s hard to stay a staid shoegazer when a soprano saxophone is firing off litling triplets fast enough to make your head spin. It’s a highly crafted sound, but never too earnest, and if the Allstars were out to lighten hearts they’ve certainly succeeded.

While there may be humor in the music, the New Orleans Klezmer Allstars are no joke. Before forming the group, Freilich was a well-established jazz guy who’d played with legendary Basin Street trumpeter Kermit Ruffins and Sun Ra sideman Michael Ray. Accordianist Glenn Hartman, who fled New Orleans after Hurricane Katrina, now operates one of San Francisco’s best small venues, The Independent. Together, the pair has led their bandmates in its decades-long mission—whose core, more or less, is to have a great time.

“Essentially it’s a party, ’cause that’s what everyone does in New Orleans,” Hartman says. Somehow, the band managed to keep that spirit alive even through the decidedly unfunny Hurricane Katrina. If anything, Freilich said, the storm was just “a huge force that interrupts you trying to tell your story,” and the only thing to do after it blows over is to pick up where you left off.

It’s impressive enough to hear him say that. It’s quite another to see the party unfold onstage. The oversized main stage at Outside Lands seemed like an unnatural, distant setting for a band that got its start playing face-to-face with sweaty, tipsy New Orleans clubbers, but the Allstars didn’t seem to mind. The ensemble was fluid and flexible, with tunes that followed the basic jazz formula of a main melody followed by a round of improvised solos. And while the melodies stuck to the highly rhythmic roots of klezmer, the improvisation was fiercely free and no one let himself get too tied to little details like a song’s key.

Especially surprising was Freilich’s guitar work, which alternated between funky rhythm comping and John McLaughlin-esque free solos with plenty of distortion. Afterward, I asked him how he managed to find a balance between traditional klezmer and the far-out jazz that was evident in every number. Freilich scoffed at such distinctions. “It’s all the same if you understand the relationships,” he says. “Ornette Coleman was conscious of klezmer and klezmer was conscious of Ornette Coleman.” New Orleans, he adds, was the perfect incubator for a new approach to klezmer that could be comfortable accommodating all influences.

“It’s easy to go out, and it’s easy to come back in,” chimes in violinist David Rebeck. After this long, it’s no surprise that the band couldn’t care less about the so-called rules of their genre. Following the rules is no fun, and fun is what this band is all about. In fact, fun is what drove Hartman to pick up the squeeze-box in the first place: “I didn’t even know how to play the accordian when we started,” he says. “I just thought it was funny.”