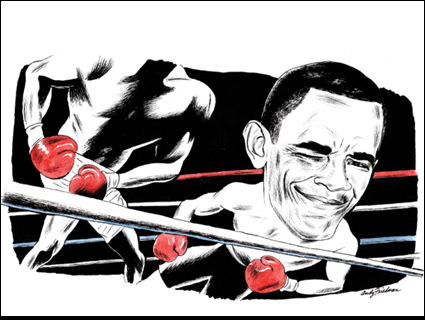 You may remember the moment when Barack Obama declared war on the Republican game plan—or so it seemed. Five days after negotiating a budget-cutting deal that averted a government shutdown in April, Obama gave a speech at George Washington University, slamming the GOP over the slash-and-burn budget proposal of Rep. Paul Ryan (R-Wis.). Republicans, he declared, were pushing a “deeply pessimistic” vision of America’s future: “This is a vision that says even though Americans can’t afford to invest in education at current levels or clean energy, even though we can’t afford to maintain our commitment on Medicare and Medicaid, we can somehow afford more than $1 trillion in new tax breaks for the wealthy.” Such a vision, Obama vowed, would not prevail “as long as I’m president.”

Want to learn more about the debt ceiling fight? Read the editors on the real problem with John Boehner, review our detailed, updated explainer on how we got to this point, and learn why Kevin Drum thinks the deal sucks. Still hungry? Andy Kroll has a great piece on what the deal means for our future.

Fighting words—and liberals were elated. Jonathan Chait of The New Republic cheered, “He beat Ryan and the Republicans to a bloody pulp.…He expressed moral outrage in a way I’ve never heard him do before, and in a way I didn’t think he was capable of.”

Then came…nothing. Or not much. And this week, Obama cut a controversial deal with hostage-taking tea party Republicans, who insisted on severe spending cuts before they would consent to the previously routine action of raising the debt ceiling.

Rather than waging a titanic battle against Republicans after Obama delivered that passionate speech, the White House hunkered down with Republican leaders to try to cobble together a deficit deal to prevent the extreme GOPers from pushing the nation into default. What happened to the pulpification? “We moved to the negotiations process,” a senior White House aide explained. “It was up to others to push this piece of it.” After the equivalent of Henry V’s St. Crispin’s Day speech, it was back to the grind.

For many progressives, it was, once again, a face-palm moment. Obama was back to his above-the-fray, let’s-be-reasonable mode—which has often infuriated lefties looking for him to mount a fierce crusade against the Republican ideologues who have been thwarting him since day one. But that’s not Obama—and not just because of his consensus-seeking temperament. His choice to persist rather than fight is strategic: He and his aides firmly believe that he accomplishes more this way, no matter how the left may kvetch. “He’s just not into the theatrics,” says a one-time top White House official. “He starts off calculating what can be realistically achieved at the end and then works back from there to determine what needs to be done.”

Recall when, right after the midterm elections, Obama’s allies yearned for a battle royal over extending the Bush tax cuts, a battle that would have sharply defined the GOP as the party favoring the well-heeled. Obama declined, repeatedly telling aides that he cared much more about achieving the best deal he could. And in the end, he negotiated a tax-cut package that granted tax breaks to the wealthy but contained a set of provisions—including middle-class tax credits and a payroll-tax holiday—that amounted to a second stimulus. In fact, White House aides boasted that the final measure included $238 billion for what Obama, in White House meetings, privately called “our folks” (low- and middle-income Americans) and $114 billion for theirs (the wealthy). The takeaway for the president: Despite the warnings about negotiating with (and empowering) “hostage-takers,” he could do more good by cutting deals than by going to war with Republicans.

Another example: Last fall, while Obama was pondering what to do about tax cuts, he was also trying to win the two-thirds Senate majority required to ratify the new START arms-control treaty. Republicans in the Senate were opposing ratification because…well, it seemed, just because.

One leader of this opposition was Sen. Jon Kyl (R-Ariz.). The administration had spent months responding to his concerns about the upkeep of the current nuclear stockpile and committed billions of extra dollars to that purpose. Administration officials thought they could win him over—until, after the 2010 congressional elections, Kyl precipitously announced that there shouldn’t be a vote on the treaty until 2011, when Republicans would have more votes in the Senate.

It looked as if he had played Obama for a fool. But the White House, though furious, did not strike back. “We decided not to open up the howitzers on Kyl,” a senior administration official says. Obama, Vice President Biden, and their aides still needed a handful of Republicans to support the treaty, and they figured that an assault on Kyl would cause GOPers to rally and render it impossible for the White House to pick off those key votes. So Obama ducked a fight—and went on to win ratification.

Though critics deride his soft-on-Republican-extremism approach for letting the opposition set the terms of debate, White House officials maintain that it has worked for Obama on key fronts. He passed a stimulus bill (though not as large as many economists believed necessary), health care reform (though without a public option), and financial reform (though it may not have gone far enough)—all through inch-by-inch legislative warfare without major public confrontation. “He’s always in search of a Republican friend,” a past Obama aide notes. This never-ending outreach, his aides believe, is also vital for drawing fickle independent voters back in 2012. And clearly, Obama’s bend-over-backward-and-then-some effort to reach a compromise on the debt deal was propelled by the White House’s calculation that indies relish compromise over almost anything—whether or not it’s a bad deal.

Obama’s hesitation to pummel may dishearten some Democrats, but his aides—who challenge the media narrative that the president has alienated his base—contend that come 2012, when the choice is between the president and a tea partyized GOP, his supporters will be fully juiced. They point to polling data showing that Obama remains highly popular among self-identified liberals; unease, they insist, is mostly among what former White House press secretary Robert Gibbs once derided as the “professional left,” a small number of bloggers and vocal activists. After the debt ceiling denouement—which has enraged liberals—these calculations may have to be revisited.

Yet, aside from appeasing put-up-your-dukes progressives, there can be immense value in a fight. A well-managed slugfest can be instructive, alerting voters to key facts and ideas. Had Obama gone after the GOPers early and often in the debt-ceiling showdown, perhaps the president could have shifted the overall political context and placed himself in a stronger negotiating position as he sought his much-cherished consensus. Instead, even as the country careened toward default in July, Obama praised House Speaker John Boehner’s “good-faith efforts.” (“He’s a good man who wants to do right by the country.”)

That same morning, Boehner had flat-out questioned Obama’s sincerity on a right-wing radio show: “Well, you know the president is in reelection mode. And as a result, that is where a lot of this rhetoric comes from.” It was an accurate encapsulation of the asymmetry in this face-off. Boehner believed there was political value in personally poking at his opponent. Obama didn’t. He doesn’t punch his way through a tough fight; he slogs through it.

It’s easy to second-guess a president. And this week is producing a flood of second-guessing. Obama and his aides are disdainful of the snap-judgment cable chatter. They know that while it’s natural for progressives to crave a more confrontational approach, there’s no way to prove consistent fisticuffs would yield better outcomes. And they believe that making what progress they can on the economy and other policy matters—rather than scoring points in pugilism—will probably help Obama most in 2012 (as well as serve the nation).

The debt-ceiling showdown has put Obama’s operating assumptions to a serious test. “Sometimes, he can appear as weak and indecisive,” a past aide says. “But he is a pragmatist. He believes you can’t achieve universal health coverage, green energy, a clean environment, rebuild America—his fundamental beliefs—if the country isn’t behind you. But in a profoundly polarized world, can this work?”