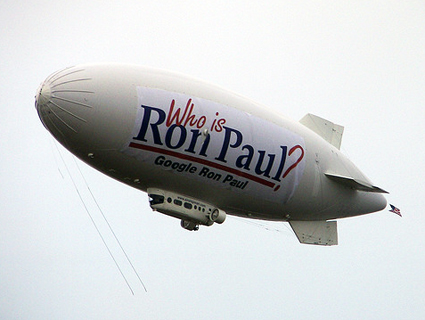 On Friday Craig Robinson, the former political director of the Republican Party of Iowa and current editor-in-chief of the influential Iowa Republican (TIR) news site, boldly reconfirmed his earlier prediction that Texas Rep. Ron Paul would win Saturday’s Ames Straw Poll. On Saturday afternoon, after speeches by Newt Gingrich, Gov. Terry Branstad, and the notorious conservative Iowa Rep. Steve King at the TIR tent, I asked Robinson if his opinion had changed.

“There’s an awful lot of people on the backside of this building,” where Michele Bachmann, Herman Cain, and Rick Santorum all set up shop, Robinson said, but from his vantage point he hadn’t been able to judge the success of Ron Paul’s and Tim Pawlenty’s turnout operations. (The enigmatic Thaddeus McCotter is within Robinson’s view, too, but hasn’t attracted much attention despite his safety clown van.)

“I think turnout’s going to be high, and for me I think that kind of lends itself to a Bachmann victory, maybe, or even an upset from someone else,” Robinson said. He’s still predicting that Paul and Bachmann will take the top two spots (not necessarily in that order), and—with the caveat that he hadn’t seen Pawlenty’s tent, where turnout has been strong too—a surprisingly good finish by Cain or Santorum. (Paul, who paid top-dollar for his tent location, has had a strong group of supporters hanging out near Hilton Colisium, where the candidates are speaking.) 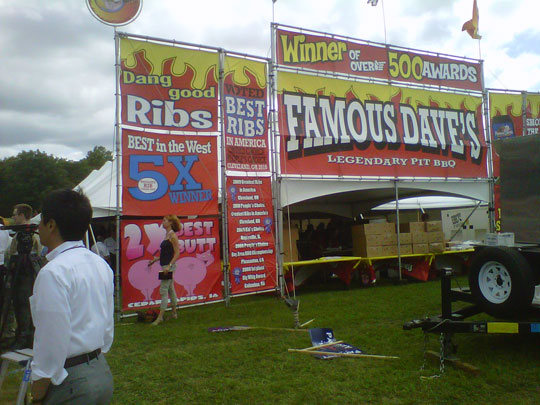 Tim Pawlenty tries to win over straw poll voters with BBQ ribs. (Photo: Gavin Aronsen)The first part of Robinson’s comment is in line with today’s conventional wisdom: a high turnout will help Michele Bachmann while a lower turnout would have been better for Paul or Tim Pawlenty, considered by many to be Bachmann’s top rival at the straw poll. The turnout does look high, with Bachmann drawing a huge lunch line in a packed tent that smells like MoJo reporter Tim Murphy’s soccer cleats.

There was a similar narrative in 2007, when prognosticators said a large turnout would help Mitt Romney and a lower turnout would give the win to Mike Huckabee. Romney won that time.