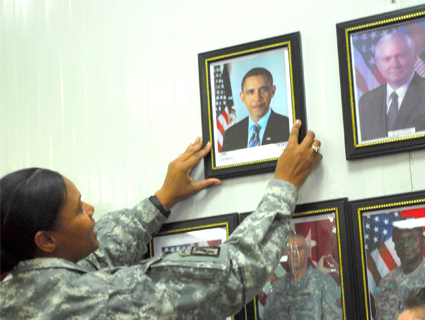 While speaking at a military tribute Sunday in Waterloo, Iowa, Texas governor and GOP presidential candidate Rick Perry tossed the crowd a red-meat ad-lib. Here’s what he said, according to Politico‘s Ben Smith:

The obvious implication is that America’s roughly 3 million active-duty and reserve soldiers, sailors, airmen and Marines don’t respect President Barack Obama—whose administration drew down their numbers in Iraq and Afghanistan, revamped the Department of Veterans Affairs, increased Pentagon funding, and oversaw the operation that killed Osama bin Laden. Is Perry for real?

Yes and no. If by “respect” you mean pure approval ratings, Barack Obama began his tenure with real support among the ranks, particularly enlisted servicemembers. (Working on Camp Victory, the US-led coalition headquarters in Baghdad, I encountered a real sense of pride and optimism among the majority of soldiers during Obama’s inauguration and first Iraq visit—a sense that was absent in the military when I served in the Clinton era.) But his approval numbers have fallen off among vets, just as they have among the general public. In late May, 37 percent of service members polled by Gallup approved of Obama’s policies.

Does that make Obama especially unpopular with service members? Hardly: In 2007, when the Iraq War had bogged down, military members and their relatives registered the exact same approval numbers for George Bush. In fact, 60 percent disapproved of Bush, and 7 out of 10 wanted a near-immediate withdrawal from Iraq. (It’s also worth noting that, despite major gains by women and minorities in recent years, the military is overwhelmingly white, male, and Protestant, a demographic that never polls well for Obama.)

But Perry’s “respect” jibe isn’t about the facts: It’s about painting a beleaguered president as effeminate and indecisive. The Republican Party has long claimed both the mantle of national security and manliness; since at least the Clinton administration, its partisans have attempted to paint their Democratic counterparts as impotent and illegitimate in the eyes of serving veterans, who are quaintly presumed to be the country’s masculine conscience. From spreading false rumors about Marines dissing Bill Clinton to the Bush administration’s “Mission Accomplished” and numerous “military behind the president” stage shows, the GOP has tried to convey a singular message: America’s Heroes© are with us, so if you like America and Heroes©, you should be, too.

Will it work in 2012? It will certainly energize an already-motivated birth-certificate, Osama-is-alive conservative base. But beyond that, Perry’s trading on his military experience, his tough demeanor, and the fact that he looks much younger than the embattled commander in chief—even though he’s a decade older. All of these factors could play well with a US electorate looking for decisiveness from Washington. Unless the current administration is willing to go on the offensive and trumpet its own national security achievements—which are not inconsiderable—Obama may not stand a fighting chance.