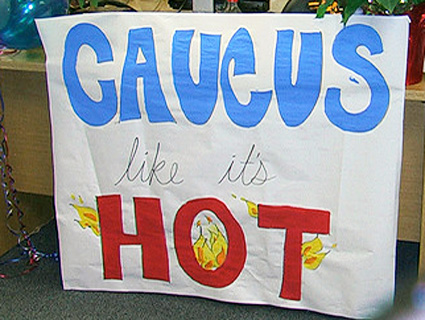 The 2012 Republican primary contest might be all anyone can talk about these days, but there still isn’t a very clear picture of what the primary calendar even looks like. With just months left before the first votes, the Republican National Committee has done little to reduce the uncertainty: GOP officials have yet to issue a final decision on which states will be first in 2012, and it’s not clear when they will.

While the RNC dawdles, several states are taking action. Arizona and Florida are considering jumping ahead of the Iowa caucuses and the New Hampshire primary to claim the first-in-the-nation title for themselves. If they do so, they could throw the entire primary calendar—and candidates’ plans—into chaos.

Here’s how it’s supposed to work: The Iowa caucuses, which traditionally start the presidential primary calendar, are currently scheduled for February 6. The current tentative calendar from the Republican National Committee would put New Hampshire’s primary on February 14, Nevada’s on February 18, and South Carolina’s on February 28. Super Tuesday—the biggest primary day by far—would then fall on March 6. In 2008, 24 states held their primaries on that day.

This year, though, Arizona and Florida are threatening to throw the whole calendar into chaos by to moving their dates forward. Florida has currently penciled in their primary for January 31, though that could change, based on a decision by the state’s “Presidential Preference Primary Date Selection Committee.” The committee is required to issue its determination by October 1. Arizona is also considering a January 31 primary, though the governor must announce a decision by Friday. If the states do decide to skip ahead of Iowa and New Hampshire, they risk sanctions from the national party for jumping the queue.

Although they’re not sure yet what the state’s committee will decide, Florida Republicans are angling to position their primary “as early as possible,” says Brian Hughes, the communications director for the state GOP. Sunshine State Republicans argue that the state’s demographics are more reflective of the nation at large than those of Iowa or New Hampshire, and its much larger population makes it essential that the eventual nominee focus more attention there early in the campaign. “There’s no road map for winning the White House that doesn’t go through Florida,” Hughes says. “Florida is and should be on the national stage.”

If the rebellious states do move their primaries up, it could set off a series of moves by Iowa and New Hampshire, states accustomed to a privileged position. There’s been talk that this reshuffling could mean primaries as early as December in those states.

A representative of the Iowa Republican Party wouldn’t say much on the situation, other than reaffirming the state party’s belief that they should stay at the head of the pack. “The date may change, but the order won’t change,” the party representative told Mother Jones. “We will push up the calendar if we have to.” Iowa takes the whole being first thing pretty seriously. The state GOP’s website proclaims that they’re the “First in the Nation.” In fact, it’s written into the state code that the Hawkeye State’s caucuses are to be held “at least eight days earlier” than every other state’s primary process.

Changing the calendar would, of course, upset what has become the traditional order in the primaries. Rep. Michele Bachmann (R-Minn.) has garnered increased national attention since she won the Ames Straw Poll earlier this month, and former Minnesota Gov. Tim Pawlenty dropped out of the race because of his poor showing at Ames. Although Iowa isn’t the sole decider when it comes to the presidential primary (see: Mike Huckabee), it does set the tone, and winning in Iowa certainly helps candidates’ fundraising efforts.

“No one would have invented this situation on purpose.”

Iowa has held the lead position since 1972, after the state Democratic Party moved their caucus forward on the calendar. Harold Hughes, the senator and former governor, was a driving force behind the move, an effort to better position a candidate who was against continuing the Vietnam War.

Before that, New Hampshire was the first—at least since 1952. For the most part, the position of the primaries wasn’t a hotly contested issue, says Rick Shenkman, publisher of the History News Network. The rise of television made the early contests more important, Shenkman says, and it’s only gotten worse in the era of 24/7 cable news and obsessive online publishing about electoral politics. The more coverage the state primaries have received, the more important they have became to forging a path to the White House, particularly when it came to building voter support and fundraising. The result, Shenkman argues, is “a very irrational system” that puts too much focus on a handful of states that aren’t particularly representative of the rest of the United States.

In the book Why Iowa?, David P. Redlawsk, a professor of political science at Rutgers University, and his coauthors look at how Iowa ended up in the role it has today and question whether the process should be evaluated. Redlawsk says the process is unlikely to change for 2012, since the national parties can’t do too much to force the states to get into line, the sanctions are generally ignored, and Iowa and New Hampshire will just respond by making their primaries even earlier.

There are some benefits to having a few early states like Iowa and New Hampshire, Redlawsk notes: Candidates are forced to spend a lot of time on the ground talking to voters and answering questions. But then again, he says, “no one would have invented this situation on purpose.”