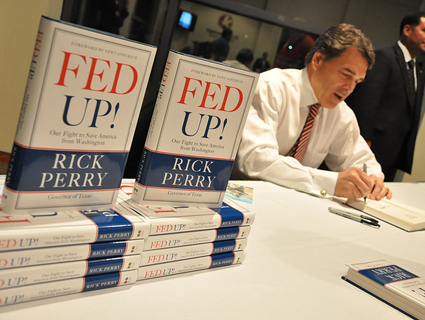 When Rick Perry was asked by an audience member in Waterloo, Iowa, earlier this month what he would do to rein in spending on entitlement programs if elected president, the Texas governor had a quick response: “Have you read my book, Fed Up!? Get a copy and read it.” Four days later, Perry’s campaign had reconsidered its pitch; his communications director, Ray Sullivan, issued a clarification to reporters that Fed Up! was not intended to serve as a blueprint for the Perry presidency, and that the most radical ideas proposed within—the repeal of Social Security, Medicare, and the 16th Amendment—weren’t meant to be serious proposals.

If you can’t trust what he’s written, you might do well to consider what he reads. Perry’s reading list (cobbled together from interviews, tweets, and a little bit of guesswork), is a mix of tea party treatises, tracts on small government, paperback thrillers, and owner’s manuals for life—some more literal than others. Here’s a sampling:

The Five Thousand Year Leap: 28 Great Ideas That Changed the World, by W. Cleon Skousen: Since Glenn Beck dusted it off, wrote a new foreword, and promoted it heavily in 2009, Skousen’s treatise on the Constitution and the faith of our founders has become required reading on the far right. Skousen, whom the conservative National Review‘s Mark Hemmingway once described as an “all-around nutjob,” argued that the Constitution was a direct descendant of Anglo-Saxon Common Law, which in turn was a descendant of the governing system of the ancient Israelites, which in turn came directly from God. To tie it all together, he floats the debunked theory that the Anglo-Saxons were themselves a (very) lost tribe of Israel.

For those looking to more fully understand the roots of Perry’s brand of federalism, The Five Thousand Year Leap is a handy starting point: Skousen views the 17th Amendment, allowing for the direct election of senators, as a crushing blow to the balance between state and federal power—a position trumpeted by Perry in Fed Up! Regulatory agencies like the EPA, which Perry reviles, are treated as the exclusive domain of the states. Even national parks come under scrutiny from Skousen, who believes they lack constitutional standing. It’s a minimalist approach to the Constitution that’s radical even by the standards of todays conservatives; in another book, The Making of America, Skousen holds up the Supreme Court’s decision in Dred Scott v. Sanford as a model of conservative jurisprudence. (The book was actually pulled from public schools in California due to its backwards views on race.)

Above all else, Skousen writes, America is a Christian nation, biblically rooted. As Perry told the Values Voters Summit in 2009 while discussing The Five Thousand Year Leap, “He asserts that natural law, God’s law, is the basis of our nation’s laws.” And it is God’s law that will guide us back to prosperity.

The collected works of Vince Flynn: Flynn earned a seven-figure deal from Simon & Schuster by writing the kinds of books people buy at airports and then leave on airplanes: Tom Clancy-style paperback thrillers focusing on the war on terror. As The New Republic‘s Jason Zengerle put it, “the protagonist of Flynn’s novels, CIA counterterrorism operative Mitch Rapp, exhibits such a talent for maiming, torturing, and killing Muslim bad guys that he makes Jack Bauer look like a simpering ACLU attorney.” That’s a stretch, but barely: Assassination plots are myriad; people fake their own deaths and those of others; covers are blown; nuclear weapons are everywhere; and a civil-liberties-defending female senator from California just gets in the way.

As one Amazon reviewer said of Flynn’s 2001 novel Separation of Power: “If you are into red, white and blue these days, you will love this book. If you are one who has reservations about what we are doing in response to 9/11, you will find instruction in this novel. If you are sitting in Bagdahd [sic], working on weapons of mass destruction, you will pray this is just a figment of the authors imagination.” We’ll leave it at that.

The Forgotten Man: A New History of the Great Depression, by Amity Shlaes: “If you want to know what this guy’s policies are doing,” Perry said of Barack Obama in 2009, “it’s been written about before.” He was referring specifically to Shlaes’ revisionist narrative of the 1930s, which casts the New Deal as an outright failure. As she writes, “From 1929 to 1940, from Hoover to Roosevelt, government intervention helped to make the Depression Great.”

It’s a theory Perry embraces in Fed Up!, writing that “recovery did not come until World War II, when FDR was finally persuaded to unleash private enterprise.” Never mind that, as Matt Yglesias points out, the wartime economy was actually defined by conscription and price controls—not a dynamic free market. The Forgotten Man, which Perry frequently brings up in interviews, provides pseudohistorical grist for the anti-stimulus, anti-welfare ideology Perry has espoused for years.

Texas histories: During his last gubernatorial campaign, Perry revealed that he was reading two novels about the founding of Texas (see below), and going by his own statements, he’s fascinated by the early years of the Lone Star Republic—particularly its last president, Sam Houston. As he told the New York Times Magazine’s Robert Draper in 2009, he considers Sam Houston his political hero and “possibly the greatest leader this country’s ever developed“—even suggesting that the father of the Republic of Texas might have made a better president than Abraham Lincoln if he hadn’t dropped out of the race early in 1860.

Texans are duty bound to say nice things about the state’s patriarch, but for Perry, talking about Houston gives him the opportunity to project the values he’d like others to see in himself. Houston was, as Perry presents himself, a reluctant hero. He offers a lesson in perseverance in the face of personal crisis, having resigned as governor of Tennessee to live in the wilderness with a Cherokee (second) wife prior to taking up arms against Mexico. And like Harry Truman, he holds a special appeal to politicians in distress, offering the promise that history will reward them for standing on principle. “Everything he did he did all the way plus,” Perry said in a 2009 documentary. In a counterpoint to Perry’s own bravado, the trait of Houston’s he seems to most revere was his unending opposition to secession: “One of the saddest things in his life for me was this man who had given his life to create a nation and then worked so hard to get it into the United States and to see it disintegrating in front of his eyes as the governor…was a tragedy.”

Islands of the Damned: A Marine at War in the Pacific, by R.V. Burgin; With the Old Breed: At Peleliu and Okinawa, by E.B. Sledge; Neptune’s Inferno: The US Navy at Guadalcanal, by James D. Hornfischer; The Gates of the Alamo, by Stephen Harrigan; The Only Thing Worth Dying For: How 11 Green Berets Forged a New Afghanistan, by Eric Blehm; Not Between Brothers, by David Marion Wilkinson:

When Perry has been asked for his reading list in the past, he’s rattled off the above choices, all of which have a unifying theme: Perry likes to unwind by reading books about war, be they memoirs, historical novels, or historical narratives. Perry’s father, Ray, served in the European theater in World War II, and the governor was an Air Force captain in the 1970s, flying C-130s in South America, Europe, and the Middle East. That shines through on the stump: In Waterloo, he told voters that the armed forces need a president they can actually respect.

Perry uses his Eagle Scout award as a talking point on the campaign trail, and proudly notes that the Scouts helped instill in him values like personal responsibility, the Golden Rule, and the importance of public service—values he believes are sorely lacking in today’s society. He believes the organization is under siege from the secular left and the ACLU, which is why he supported the organization’s ban on gay scout leaders, and donated all of the proceeds from On My Honor to the group’s legal defense fund. As he told the New York Times, “Scouting ought to be about building character, not about sex.”

The Bible, various authors: Perry’s a big fan of the all-time worldwide bestseller (on which the movies The Ten Commandments and Prince of Egypt are loosely based), telling Texas Monthly in 2005: “It’s still a pretty good guidebook, frankly. I know people get all tangled up about the church and state thing, but, [it’s a] pretty good guidebook.” Although he once told reporters his religious views have little impact on his politics, Perry has reversed himself in recent years, even going so far as to lead “The Response,” a massive prayer and fasting rally at Houston’s NFL stadium in early August.

Perry has specifically embraced the teachings in the Book of Joel. Joel is a part of the Bible that’s taken on special meeting among members of the New Apostolic Reformation, the small but growing movement whose leaders have the ear of the governor. Perry cited Joel in in the run-up to The Response and then quoted from it during his prayer: “Let them say, ‘Spare your people, Lord. Do not make your inheritance an object of scorn, a byword among the nations. Why should they say among the peoples, ‘Where is their God?'”

The Road to Serfdom, by F.A. Hayek: Maybe you’ve heard of this one. Perry turns the title into a turn-of-phrase in Fed Up!, arguing that the 16th Amendment, which instituted the federal income tax, marked “the great milestone on the road to serfdom.” Hayek’s argument is sort of what you’d expect: Government interference in the free market is slowly leading us toward a socialist economy, which in turn is stripping away our individual freedoms and then, boom, serfdom. And that, in a nutshell, is Rick Perry’s case against Obama.