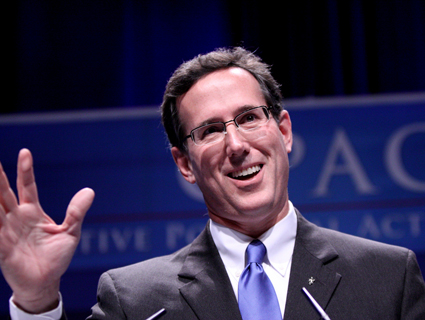 When the notoriously anti-gay presidential contender Rick Santorum stepped inside the Hiawatha Public Library in eastern Iowa Wednesday afternoon to explain how the Iowa Supreme Court tried to “redefine nature” by striking down a same-sex marriage ban in 2009, he begged patience: He was battling a case of laryngitis. “I don’t want to lose my voice right before the debate,” he said, sipping on a cup of tea from Starbucks. (Santorum was referring to Thursday night’s debate in Ames, the last major all-candidate event before the city’s straw poll Saturday.) But the sore throat didn’t stop the former Pennsylvania senator from dishing out conservative red meat for more than an hour to two dozen mostly elderly potential straw poll supporters.

President Barack Obama sympathizes with Latin American socialists, Santorum warned, adding that Obama ousted a strong ally in Egypt’s Hosni Mubarak and propped up the radical Muslim Brotherhood. On the domestic front, Santorum said, the president has crippled businesses with Obamacare’s regulations and scapegoated “millionaires and billionaires” for the nation’s economic woes so he can try to tax them more.

Santorum’s main point, though, was that limited government and a vibrant economy will never again flourish unless the United States revisits its Judeo-Christian roots. The ex-senator spent a quarter of his speech explaining how our rights come from God, not any gay-friendly government, and those rights create the backbone not only of our society but also of all the democratic governments the US has helped create throughout the world.

Santorum was willing to double down on his promise to create a presidential commission to “investigate harassment of traditional marriage supporters,” part of the National Organization for Marriage’s anti-gay marriage pledge he endorsed last week. (“They are being harassed. You can read the paper and see all of the instances when people have been harassed.”) But he refused to explain why, after railing against government excess for nearly an hour, he would spend federal money on such a peculiar endeavor.

“I’ll talk to you later,” he said, sitting down in the passenger seat of a campaign sedan and promptly slamming the door.

Hiawatha, a Cedar Rapids suburb of 7,000 people in eastern Iowa, is a two-hour drive away from Ames. By Santorum’s count, he’s convened more than 110 meetings in 68 of Iowa’s 99 counties.

Santorum’s campaign argues that a top-three finish in the Iowa caucuses next year could propel the ex-senator to victory in the South Carolina primary en route to a general election triumph over Obama. That may be wishful thinking for a candidate who consistently polls at the bottom of the pack in Iowa. Saturday will be the first opportunity for Santorum’s grassroots supporters to prove the polls wrong—or jump ship to a winner.