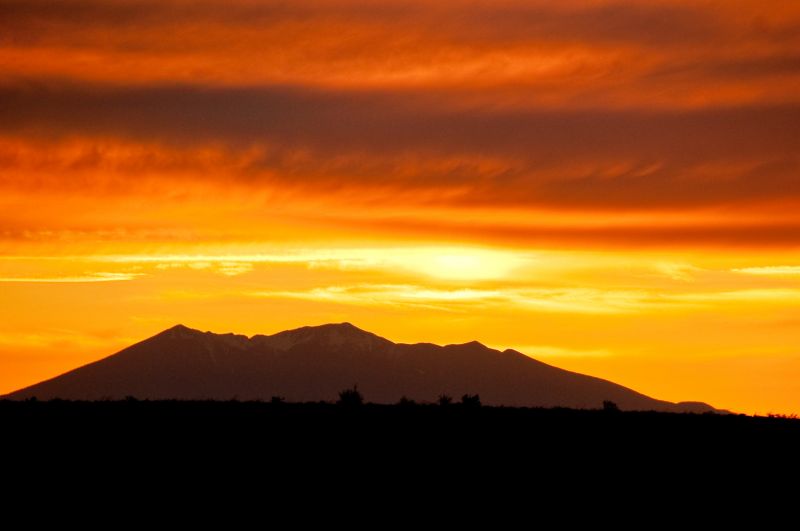 If owners of a ski resort in Flagstaff, Arizona, get their way, skiiers will soon be gliding over artificial snow made from 180 million gallons of sewage effluent. Yes, you read that right: snow made from recycled poop water.

The Snowbowl Ski Resort sits atop the San Francisco Peaks, a range of inactive volcanoes that contain the only alpine tundra in Arizona, at heights of more than 12,000 feet. Resort owners first sought snowmaking permission on the Peaks in 1979 to compensate for the snowfall fluctuations inherent in operating a ski resort in the desert. Community uproar about the plan to pump in artificially generated snow squelched the proposal at the time, but in 2005, the Forest Service approved a request from Snowbowl to expand its operations and begin making fake snow, claiming it was necessary to ensure a “reliable and consistent operating season.”

The city of Flagstaff agreed to sell reclaimed water from one of its wastewater treatment plants to the resort to produce the fake snow. The resort plans to build a new pipeline to pump the water 15 miles uphill to a reservoir, where it will remain until it is needed. When the resort needs to make snow, it will pump the effluent into large fans that will make a fine mist of water droplets that can freeze quickly and become “snow.” 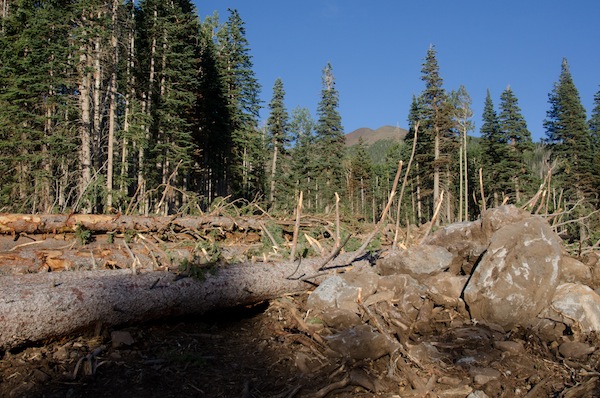 Bulldozing has already begun to make way for the Snowbowl expansion. Photo by James Q. Martin.

The Environmental Protection Agency says that reclaimed water is safe for humans—as long as it’s properly treated. But since the Forest Service approved the project, environmentalists, community members and Native Americans in the region have mounted opposition to the project, citing environmental and health concerns. The US Geological Survey has found that even “clean” wastewater “can contain a wide range of organic chemicals, and studies conducted by Dr. Catherine Propper, a professor of biological sciences at Northern Arizona University, found that Flagstaff’s treated sewage water contains pharmaceuticals, hormones, industrial pollutants, carcinogens and endocrine disruptors. A 2007 study from the US Agricultural Research Service found that the environmental and public health impacts of using reclaimed sewage effluent for irrigation “are largely unknown”—not exactly a ringing endorsement for anyone who wants to go out and ski the slopes.

Snowbowl would be the first resort in the world to use 100 percent wastewater to make its snow, and critics have raised concerns that it was unwise to approve the plan without fully understanding the long-term impacts. “When you put these substances into a delicate alpine environment like the Peaks, there are going to be big impacts to amphibians, other animals and the soil,” said Andy Bessler, an environmental justice organizer for the Sierra Club based in Flagstaff.

There are cultural issues with the project, as well. Thirteen different Native American tribes in the region consider the Peaks sacred ground; they worship, make offerings, conduct ceremonies and gather herbs throughout the range. Even as the Forest Service approved Snowbowl’s plan, the agency’s analysis acknowledged that this project will have adverse impacts to the cultural and biological integrity of the Peaks. “[T]he Forest Service acknowledges the tribal perspective of the effects of ‘scarring’ on the sacred landscape and that the associated spiritual and cultural impacts may in fact be considered irreversible in nature.” (Emphasis theirs.) The analysis also acknowledged that the use of reclaimed water for snow “could negatively impact the spiritual and medicinal purity of resident flora on the Peaks.”

Indeed, dumping sewage effluent on Peaks amounts to “cultural genocide,” said 35-year-old Klee Benally, a Navajo who has spent half his life fighting for the Peaks. “Our identity is based on our relationship with these sacred places and this—having the source of our spiritual renewal become so contaminated and desecrated—is a direct threat to our survival.”

Lawsuits have delayed development of the reclaimed water system since 2005, and yet another appeal is still pending. But this spring Snowbowl began construction anyway, said Howard Shanker, an attorney representing the Save the Peaks Coalition and nine other concerned citizens. “While the appeal is pending, the government and Snowbowl are cutting down trees and putting down pipe as fast as they can.”