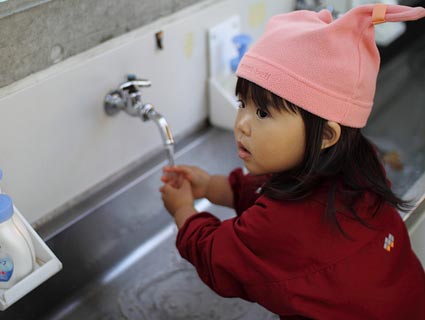 Update: Read about the right-wing groups who argue that an EPA ban on anti-bacterials would bring us one step closer to a “nanny state” here.

By now, you’ve probably heard of triclosan, an anti-microbial agent present in all kinds of personal hygiene products, from soap to deodorant to toothpaste. The New York Times recently reported on the raging debate between public health advocates and the soap industry over the product’s safety.

If you’re waiting for the FDA to weigh in with a final verdict on triclosan, don’t hold your breath: The agency has been dragging its feet on the subject for 37 years. In 2010, it finally promised to release the results of its scientific review of triclosan by spring 2011. But spring came and went with no word, and as Natural Resources Defense Council attorney Mae Wu noted on her blog, the agency quietly extended its own deadline to winter 2012 on its website, without publicly announcing the delay. When I asked FDA spokeswoman Shelly Burgess about the silence on the delay, she told me, simply, “FDA doesn’t normally make public announcements on the status of its rule-makings.” So why’d you promise spring 2011 in the first place?

But far be it from the soap industry to sit idly by while the FDA deliberates. In April, the trade group American Cleaning Institute (ACI) launched Fight Germs Now, a site that claims to be “the official source on anti-bacterial hygiene products.” Fight Germs Now’s FAQ page assures consumers that despite the rumors they may have heard, triclosan and other anti-bacterial agents are safe, effective, and completely necessary in the fight against germs.

I was curious as to whether the ACI’s claims could withstand scientific scrutiny, so I checked in with Wu and her colleague Sarah Janssen, a senior scientist at the NRDC. They handily debunked a few of the major points that Fight Germs Now tries to make:

1. “Sometimes plain soap and water is not good enough.”

Actually, says Janssen, there’s plenty of evidence that triclosan is no more effective than soap and water: See this study and this review of several studies for starters. (The one exception is toothpaste; there’s some evidence that triclosan helps fight gingivitis.) Fight Germs Now likes to tout a study from 2007 that found that people who washed their hands with triclosan carried less bacteria onto their food than those who used soap and water, but Janssen points out that before you buy this line, you might want to consider the fact that the study was performed by Henkel, makers of Dial anti-microbial soap.

2. “Triclosan does not accumulate in food chains because it is excreted by animals and man by their metabolism.“

While it’s true that we do excrete triclosan, that doesn’t mean it disappears from the environment. A 2008 study found that earthworms take up triclosan from the soil, showing that organisms “can be contaminated with these chemicals and raising concerns that this will make its way up the food chain,” Janssen says. More worrisome, a 2010 study found that soy beans grown in greenhouses also absorb triclosan from the soil, which, considering the vast amounts of soy that we feed livestock, has major implications for our food supply.

Au contraire, say Janssen and Wu. There’s mounting evidence that triclosan and its close relative triclocarban do interfere with our thyroid hormone and sex hormones in both females and males. This 2008 study showed that triclosan disrupted puberty in rats, and this one found that male rats’ sex organs got bigger when triclocarban was added to their food. Industry likes to claim that rats and people aren’t comparable, but “the hormone systems in lab animals are actually extremely similar to our hormone systems,” Janssen says.

4. “Insufficient evidence exists to demonstrate that the use of antiseptic drug products harms human health.”

A number of recent studies have shown that anti-bacterial products might be contributing to antibiotic resistance (here are a few to start with).  Then there’s the fact that triclosan is known to be completely ineffective against “gram negative” bacteria like pseudomonas and serratia, both of which cause major infections in hospitals. In fact, notes Janssen, a hospital outbreak of serratia was traced back to anti-bacterial soap dispensers.

For a good list of which products contain triclosan, check out this fact sheet from Beyond Pesticides.