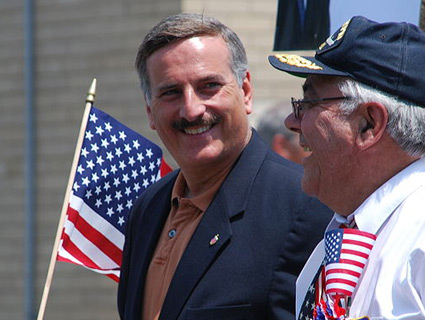 The House seat vacated by disgraced former Rep. Anthony Weiner suddenly doesn’t look so safe for Democrats. That’s thanks in part to a series of untimely gaffes by Democratic candidate David Weprin, who will face off against Republican Bob Turner in a special election on September 13.

The influential New York Daily News savaged Weprin over the weekend after he belly flopped on a simple question from their editors: what is the national debt? With a reported “deer in headlights” look, he twice guessed $4 trillion, about $10 trillion off from the correct answer. As cringe-worthy a moment as it was on its own, its impact is much worse in Weprin’s case: he’s been selling himself as a fiscal Mr. Fix-it, touting his eight years as chair of the City Council’s finance committee as his top qualification.

The next day Weprin dropped out of a debate with Turner at the last minute, citing logistical problems caused by the hurricane. But the storm had already passed and the move prompted speculation—fanned by [Republican candidate Bob] Turner’s camp—that Weprin had dropped out to avoid taking heat for his debt screw-up the day before.

A little bad press will not sink a campaign. But one poll showed Weprin leading Turner by just six points before the gaffe machine went into overdrive. Democratic strategists still think Weprin’s going to win. But he’ll have to lean even more heavily on union support, milk a plum endorsement from The New York Times for all it’s worth, and go full-on negative. So far, that’s meant trying (and mostly failing) to link the apparently moderate Turner to the tea party. It’s a tough sell.

For his part, Turner has had no problem taking cheap shots at Weprin, using TV ads to tie him to the Cordoba House “controversy” and insinuating that Democrats are prepared to sell out Israel (Weprin is an Orthodox Jew). With the election’s close proximity to the tenth anniversary of the September 11th attacks, the candidates are expected to dial back the vitriol in their campaigns’ closing days.

Weiner’s district is considered a Dem stronghold. If Weprin loses, expect liberal pundits to sound the death knell for the party in 2012. Which, of course, would be a totally kneejerk, exaggerated reaction. But don’t forget: although it takes a team of dedicated, tireless strategists to win an election, it takes just one ill-prepared candidate to blow it.