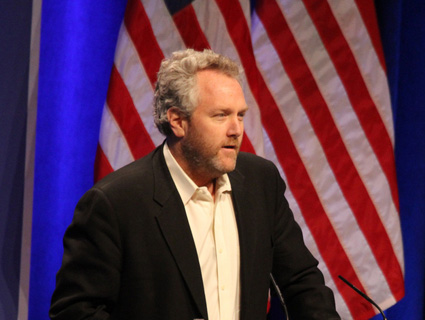 Earlier this week I wrote about a piece published on Andrew Breitbart’s BigGovernment.com that relies so heavily on flawed assertions about a new global-warming study that it’s ripe for a retraction. Not only did the piece wrongly attribute an author to the new study, published in Nature in late August, but it also recycled an old quote from that person to promote its claim that the study definitively refuted human-caused climate change. (The study, as I explained in detail, did nothing of the sort.)

Multiple attempts the prior week to reach Breitbart and the writer of the piece, Chriss W. Street, about the erroneous contents had failed to get their attention. But apparently my story (and subsequent posts in The New York Times, Salon and Media Matters) did: An editor’s note appeared on the Big Government piece later the same day. Unfortunately, it’s more of a wreck than it is rectifying. Breitbart.com’s “in-house counsel” Joel Pollak says in the note:

Earlier today, Mother Jones…accused Andrew Breitbart of a “global warming blunder” because the piece below cited Jykri Kauppinen as an author of a Nature study on cosmic rays. The author of the piece, Chriss W. Street, has indicated that Kauppinen is the author of a separate submission to Nature in 2010 that also contests the UN Climate Panel’s “consensus” view on the degree to which human activity contributes to global climate change. Street stands by his argument, regardless of the minor citation error that Breitbart’s habitual critics on the left have attempted to magnify.

Why Street failed to “indicate” in his piece the true orgin of Kauppinen’s comments, and why he passed them off as a conclusion of the study just published in Nature, Pollak doesn’t say. Nor does Pollak explain why the piece continues to state, erroneously, that Kauppinen is one of the new study’s authors. (Chalk it up, perhaps, to the stuff of “minor citation.”) As for Big Government’s blatantly wrong claim that the new study debunks overwhelming scientific consensus on humanity’s role in climate change, it seems that one was, well, simply too hot for them to touch.