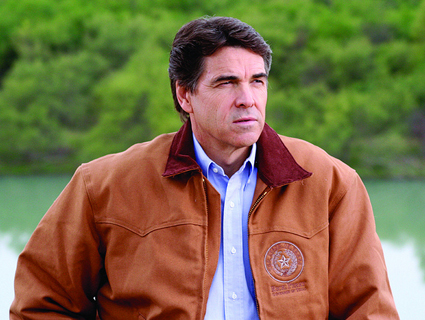 Wildfires are burning across central Texas right now, the product of an historic drought and high winds from Tropical Storm Lee. An estimated 3.6 million acres have been scorched since November, with the flames approaching the city limits of Austin; damage is expected to exceed $5 billion. In the macro-sense, this is climate change-caused problem, with Texas’ climate set to become dryer and dryer over the ensuing decades, making extended droughts the new norm. But it’s also a crisis of emergency management. Although Texas Governor Rick Perry has called his state “a model for the nation in disaster preparedness and response,” he has taken steps over the last year that would dramatically change that.

Specifically, as Raw Story notes, Perry’s most recent budget slashed spending for volunteer fire departments—who handle much of the fire-fighting duties in rural areas—by 75 percent, from $30 million to $7 million. The cuts meant that cash-strapped municipalities would then be forced to either pick up the slack funding-wise, or deal with reduced services and put off upgrading outdated equipment. As Reuters noted in May, volunteer fire-fighters “are first responders to roughly 90 percent of wildfires in Texas.”

The Washington Post today frames Texas’ fires as an opportunity for Perry—who is currently leading the GOP presidential field—to demonstrate his leadership skills during a crisis. Optics are fine, hands-on management is well and good, but the policy matters here: Texas’ climate is going to become increasingly vulnerable to drought and fire, while its governor insists that climate change doesn’t exist, and cuts funding for the agency tasked with responding to it. Perry and Texas Republicans contend that tough choices were necessary to close the state’s budget gap—but the decision to close that gap by cuts rather than revenue increases was itself a choice, and the priorities on what and how much to cut were choices as well.

Update: Over at The Economist, Erica Greider has some more thoughts:

Obviously Mr Perry didn’t cause the fires. But over the past year, the hallmarks of his response to the drought have been calls for prayer and for federal emergency assistance. The first measure doesn’t hurt, I suppose, but I’m not aware of any data that supports its efficacy, and prayer is not a good substitute for, say, a more prudent policy about water management, which has long been known to be a looming challenge in Texas and the southwest.