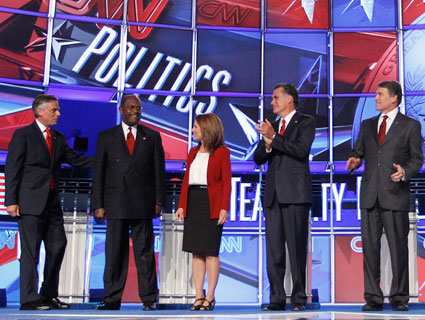 Let’s cut to the chase: The GOP presidential field is a pack of liars.

That sounds like a rather intemperate assessment, the sort of statement that is motivated by bitter partisanship or blinding ideology. But taking a clear-eyed look at both the false statements hurled at Monday’s Republican debate (brought to you by the odd merger of CNN and the Tea Party Express) and those deployed at other times in this still burgeoning primary race, it’s difficult to reach any other conclusion. Most of these presidential wannabes are shoveling lies—and forcing fact-checkers to work overtime.

Oh, and there have been so many more falsehoods flung during the fledgling campaign. At the previous week’s debate at the Reagan presidential library, ex-Sen. Rick Santorum of Pennsylvania claimed that Obama was forced to take action in Libya by the United Nations. Not even close. Obama’s ambassador to the UN, Susan Rice, had pushed the Security Council for a very forceful resolution endorsing military intervention in Libya. During this debate, Romney, according to Factcheck.org, “misleadingly claimed that the Massachusetts health care overhaul [he enacted] affected just 8 percent of the state’s residents, while the federal law will affect ‘100 percent of the people.'” Both plans compelled everyone to obtain insurance or pay a penalty.

Perry was not speaking the truth when he called Obama an “abject liar” for claiming that overall crime rates in towns on the US-Mexico border had declined. Crime rates had dropped. Perry also sidestepped the truth when he blamed the high rate of uninsured Texans on the federal government’s refusal to grant his state flexibility for its various health care programs. It was the Bush administration that rejected the state’s request for a waiver, because its application was shoddy and incomplete. Then Texas never resubmitted the application.

Bachmann, for her part, dropped one false bomb after another. She claimed the CBO had found that “Obamacare is killing jobs.” (Nope. The CBO had said that under Obama’s health care overhaul a small number of people who are only working to obtain health care insurance would leave their jobs because they would be able to receive health care through other means.) She maintained that “Obamacare took over one-sixth of the American economy.” (It was no government takeover. Politifact.com branded this contention the “lie of the year” in 2010.) And she falsely asserted that Obama has told Israel that “they need to shrink back to their indefensible 1967 borders.” (Obama said that the 1967 borders should be a starting point for the Israeli-Palestinian talks.)

All told, this is a big pile of collective bull. (And we’re only considering two debates.) But this heap of untruths poses a problem to political journalists: Should they take serial liars seriously? Given that one of them might end up in the White House, they must.

The mainstream media tends to shy away from describing candidates as liars. It can be seen as a qualitative judgment, and they like to stick to the facts. Media outlets do provide fact-checking features, such as Kessler’s excellent column. But they don’t see it as their job to call out the candidates. After all, did CNN’s Wolf Blitzer press any of the GOPers on their false statements?

The L-word is heavy artillery—ammo that’s tough to deploy. Lying suggests willfully peddling information known to be false. And who can read the mind of a politician? Yet in many of the instances cited above, the perps are repeat offenders—restating false statements that had already been demonstrated to be untrue. So though one cannot see what a candidate is thinking—perhaps Bachmann truly believes that Obama “stole” $500 billion from Medicare—a public figure who willfully (and repeatedly) neglects facts warrants being branded a liar. If not a liar, there’s another choice: delusional.

Politicians on all sides do tend to mug the truth. But the GOP race has amounted to a crime spree. And that’s as much of a story as who’s up and who’s down.