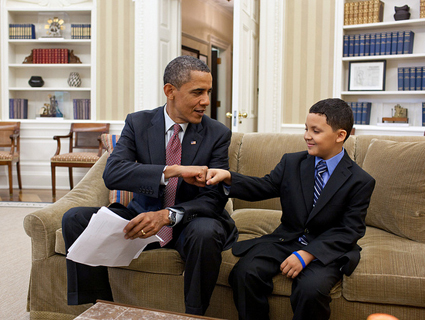 "Don't tell anyone what I told you, okay?" According to two GOP congressmen, President Obama has a secret plan to steal the 2012 election.<a href="http://www.flickr.com/photos/whitehouse/5937200216/sizes/z/in/photostream/">Pete Souza</a>/Flickr

There’s another piece of this puzzle. What the Administration is doing, is taking a very aggressive move in the people that have illegal status and moving them through citizenship and waving all the fees and waving anything they can to get the process done in time for 2012. That’s something I would love to see the media focus on.

Mercy! Expect to hear a lot more talk like this over the next 12 months, as right-wing media outlets shift into overdrive in the run-up to the election. The same thing transpired with ACORN in 2008 when Sen. John McCain (R-Ariz.) famously declared that we are “on the verge of maybe perpetrating one of the greatest frauds in voter history in this country, maybe destroying the fabric of democracy.” (We’re still here.)

But is there anything to it? Jason Salzman, a Colorado blogger, took Coffman’s suggestion and looked into it. The short answer is no. That’s the longer answer, too.

As Salzman notes, undocumented immigrants can’t be moved through the citizenship process, because a prerequisite of applying for citizenship is that you have to be living here legally. The number of fee waivers that have been granted have increased, but again, there’s no way to grant a fee waiver to someone who isn’t a lawful resident so that’s kind of moot; the change is due to the fact that there wasn’t previously an easy way to apply. And most crucially, there hasn’t actually been an increase in the number of naturalized citizens:

If President Obama is secretly granting citizenship to undocumented residents, he’s doing a really terrible job. The larger issue here for Coffman, though, isn’t really about immigrants, it’s about voter turnout—he’s also sponsored legislation to repeal the portion of the Voting Rights Act requiring that ballots be printed in languages other than English. For that, I’d recommend Ari Berman’s excellent Rolling Stone piece on the GOP’s “War on Voting.”