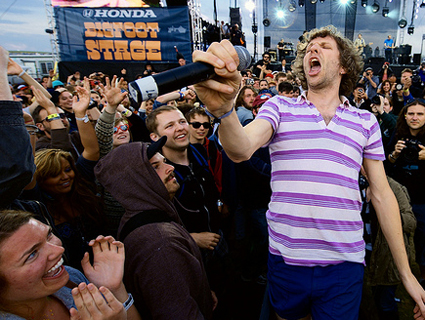 After the food trucks rolled out and the klezmer dust settled at San Fransico’s Outside Lands music fest, the impossible to Google dance-punk band !!! (alternatively pronounced chk-chk-chk, pow-pow-pow or bam-bam-bam) had one last Bay Area funk out. During !!!’s private set at the Barrel House, a SoMa hideaway that lives up to its saloon moniker, front man Nic Offer rocked the very same purple shirt and blue shorts from the festival to a packed audience of industry folk and hardcore fans. Boogieing with the best of the front row, Offer sounded off on SF bars closing at 2 am, donned a glow jacket, and caroused with his band mates as they blasted a lightning-rod set of a dozen electro-synthed, percussion-heavy dance tracks.

With regards to !!!’s frank and freaky titles like, “Jamie, My Intentions are Bass,” “Pardon My Freedom” and “Even Judas Gave Jesus a Kiss,” Offer tells me that keeping things funkin’ weird is where the band finds its staying power. “Each record is a record we never dreamed we could have made. But it’s that same strange, funky thing we’ve been trying to do the whole time, and that consistency is there throughout.” Thumbing an edamame pod after the show in the venue’s hideaway loft, Offer sat down for a quick interview.

Mother Jones: How was Outside Lands?

Nic Offer: It was really good, we had a great time. It’s a beautiful festival, great crowd, great energy, great weather. No complaints.

NO: Probably the Benicàssim International Festival in Spain because they have a pool backstage. That pretty much trumps everything. And they have someone around who’ll take your drug order, and that’s pretty cool too.

MJ: I take it you’re not jaded by all the hype around these summer festivals.

NO: Yeah, that’s the thing. You should always be able to roll up to a punk dog show and still be able to do it and be excited about being there. Because when you’re cramped and the PA is shitty and the crowd is jamming up against you, that’s the good stuff.

MJ: So if all your heroes are weirdos, name some for me?

MJ: How about your dream concert bill?

MJ: If I put all the adjectives known to man in a hat and you pulled out four, which ones would best describe your music?

NO: Dance, punk, disco, funk. Wait, that’s not terribly original. I just like the strange and weird, danceable and visceral sounds.

MJ: When you’re doing your thing on stage—glow coat, dance shorts, and all that—is that you or an alter ego?

NO: Ha, it’s me. Friends have asked me that, and they’re like, “Who is that up there?” But no, it’s definitely me. What you’re seeing up there is a 10-year-old lip-syncing in front of his mirror—just fast forward a bit with a band and some fans to make it more of a party.

MJ: Now you’re also a street performer, Nicasso the Wonderful? What trick have you made the most money from?

NO: I have no idea what this project is, just something I’m playing around with. I need to get this act together, I’ve let it slip a bit. I get more interested in music, or get distracted by something else. But it’s something I do with my friends, and I can get into it at any point. Can’t say I’ve made much money…yet.

MJ: Tell me about your songwriting process. How do the nine of you pull an album together?

NO: Yeah, it’s hard because we don’t even live in the same town, so whatever formation can get together is what we run with. Right now it’s been a lot of writing, playing with different sounds and textures, just putting things down. I’ll write songs with one member, then we’ll bounce ideas off each other, just sending bits and pieces back and forth.

MJ: New album in the works?

NO: We’re hard at work right now, but lately we’ve just been traveling the festival circuit. We were in Korea last weekend, so we’re just going around right now to try out some songs and enjoy the season. But yes, an album is in progress.

MJ: Who are you listening to these days?

“When you listen to our albums and put them next to each other, it sounds like a band evolving.”

NO: I watched the tUnE-yArDs at Outside Lands and she was just great from beginning to end. I thought she was fresh; I wasn’t bored at all. I like lots of contemporaries, and I’m definitely not one of those people who are mad at their peers. I appreciate anyone who’s putting effort into their work.

MJ: What would be your theme song?

NO: “Purple Rain” for sure.

MJ: Have you ever met Prince?

NO: Nah, you’re not supposed to meet your heroes. I like the image I have in my head and I’ll keep it like that.

MJ: How would you describe the wild ride you’ve had with the band since 1996?

NO: It feels like we’re one of those classic, legendary bands that are cherished for flying under the radar. We’ve been there, we’ve seen it and we somehow didn’t get assailed. I think it’s good that we’re not this huge-label sell out. When you look back at the end of your career, and you see that you’ve worked hard the whole time and you tried, that’s a good legacy to leave behind. I’m proud of our legacy. When you listen to our albums and put them next to each other, it sounds like a band evolving, getting more mature, and the sound getting deeper—deeper and denser. You can feel us learn how to write songs and get more of what we want every time. Don’t get me wrong though, we definitely want to be the number one played song on your iPod.