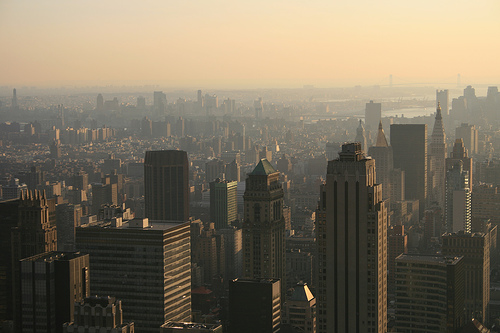 On Friday, in a move that shocked enviros and public-health advocates, President Obama asked the Environmental Protection Agency to withdraw its proposal to tighten a key air-quality standard. The request, Obama said, is part of the administration’s efforts to reduce “regulatory burdens and regulatory uncertainty.”

The EPA has been at work on new rules on ozone pollution, better known as smog, since September 2009. The agency rolled out new, tougher draft standards in January 2010, only to have the release of the final rules repeatedly delayed. In a statement, Obama said he has asked the agency to wait until 2013—you know, after the next election—to improve the standard.

The decision to single out this rule is significant. Back in 2008, the Bush administration EPA issued smog rules that called for limits of 75 parts per billion, which were weaker than those that the agency’s own scientists said was necessary to protect human health. Improving the standard has been a top priority for environmental and public-health experts, so when the EPA said in January 2010 that it was considering lowering the limit to between 60 and 70 parts per billion, those groups were cheering.

According to the American Lung Association, the weaker standard means that as many as 186 million Americans are currently breathing in unhealthy levels of smog. The EPA’s own figures are even more shocking. If the Obama administration set the lower standard of 60 parts per billion, it would prevent 4,000 to 12,000 premature deaths a year by 2020. Even the higher standard of 70 parts per billion would save between 1,500 and 4,300 lives per year. Improved air quality would bring down the number of deaths and hospitalizations every year due to asthma, bronchitis, and other heart and lung conditions.

The EPA also noted that while compliance with the new rule would cost polluters between $19 billion and $90 billion a year by 2020, the benefits to human health will be worth between $13 billion and $100 billion every year.

EPA administrator Lisa Jackson issued a terse statement on Friday morning, citing other major improvements that the administration has made on clean air and promising to “revisit the ozone standard.” And the White House circulated a blog post from Deputy Assistant for Energy and Climate Change Heather Zichal touting all the other things it has done on air quality.

But environmental and public-health groups are, as you might guess, flabbergasted at Obama’s announcement. “This is a huge win for corporate polluters and huge loss for public health,” said Gene Karpinski, president of the League of Conservation Voters, in a statement. The statements from pretty much every other group have expressed similar outrage.

The American Lung Association filed suit against the EPA following the weak Bush standards but dropped it after the Obama administration said it was going to reconsider. The group issued a statement on Friday signaling that it will revive the suit now that the Obama administration has signaled that it is not going to improve the standard, which is a violation of the Clean Air Act, the group says.

My two cents: I don’t think it’s a coincidence that the announcement came on day when the Labor Department released the worst jobs report in 11 months. The move certainly plays right into the “jobs vs. the environment” frame that the opponents of any and all regulations have constructed. Worse, though, is that it feeds the idea that it’s perfectly okay for the administration to ignore the advice of agency scientists.

It’s also not clear whom Obama thinks he’s going to win over with this. I’m pretty sure this won’t send the American Petroleum Institute or the Chamber of Commerce rushing to donate to his reelection bid, or make Republicans start saying nice things about him.