This animation is compiled from satellite still images of the Arctic sea ice acquired between 7 March and 9 September 2011. The last image records 2011’s lowest sea-ice extent, give or take a day or two. The National Snow and Ice Data Center (NSIDC) calculates 2011 to have lost more ice than any year since record keeping began other than 2007. Though the University of Bremen calculates that 2011 beat out 2007 for the lowest ever sea ice extent.

The NASA’s Earth Observatory page explains why the 2011 melt is more ominous than 2007, regardless of where it falls in the final record keeping:

2011 proved to be a year of extreme melt. By early September, the area covered by sea ice in the Arctic Ocean was approaching a record low… In 2007—the last time sea ice reached similarly low levels—conditions were ideal for melt. Skies were clear, wind patterns thinned the ice, and warm air temperatures melted the ice. Weather patterns in 2011, by contrast, were typical. This means, say NSIDC scientists, that the ice was thin and spread out before the melting even started in the summer of 2011. It is a sign that Arctic sea ice is thinning. Indeed the last five years include the five lowest sea ice extents since records began in 1979, and much of that trend has been caused by global warming, says NASA Cryosphere Program manager Tom Wagner in his video interpretation of the 2011 sea ice record. 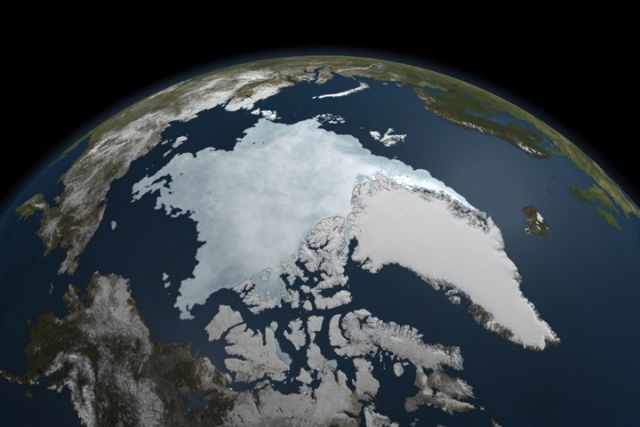