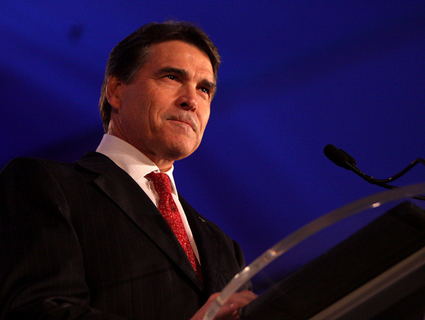 During his nearly 11 years as Texas governor, Rick Perry has sidled up to big polluters while pocketing their campaign donations, battled the efforts of the Environmental Protection Agency, and blocked environment regulations in a state that ranks first in the nation in carbon dioxide emissions from power plants. But near the top of Perry’s most controversial decisions on the environment is hand-picking a self-professed climate change skeptic and industry ally to lead the state’s top environmental watchdog.

In 2007, Perry appointed Dr. Bryan Shaw, an engineer and professor at Texas A&M University, to head the Texas Commission on Environmental Quality (TCEQ), a regulator with a $350 million budget and a mission to “protect our state’s human and natural resources consistent with sustainable economic development.”

The commission issues permits to new energy plants and applies and enforces Texas’ environmental regulations. In theory, it would be charged with enforcing climate change mitigation regulations too. The TCEQ is led by three commissioners, all appointed by the governor.  And under Perry, the TCEQ has acted as a rubber stamp for the energy industry in Texas, say environmental attorneys and advocates. “With one exception, Perry has appointed people who are hostile to the environment and who are very ideological,” says Jim Marston, director of the Environmental Defense Fund’s (EDF) Texas office.

Exhibit A is Perry’s choice of Shaw, a fellow climate change skeptic, to lead the TCEQ. Despite near-universal consensus that humans cause global warming, Shaw said in his confirmation hearing that the science of climate change remains unclear. Pressed further, Shaw added: “I don’t believe it’s fully vetted. Fortunately or unfortunately, having a consensus of a group of scientists doesn’t make that fully settled.” (The Perry campaign did not respond to a request for comment. Shaw’s office declined an interview request.)

Not only do Shaw’s denials ignore a vast body of climate science research, they break with scientists at his own university. The Texas A&M atmospheric sciences department’s website features a statement signed by all faculty stating that global warming is real, humans are “very likely” the cause of “most of the recent warming,” and inaction could inflict “serious adverse impacts on our environment and society.”

EDF’s Marston says Shaw should pay his colleagues in the atmospheric sciences department a visit to bone up on climate science. In fact, as the Texas Observer notes, Shaw already has talked climate change with A&M expert Gerald North. North told the Observer that he left the chat sensing “political and economic considerations weighed more heavily” on Shaw than actual science.

In 2008, Shaw led a state advisory panel created by Perry to study the potential impact of federal greenhouse gas regulations on Texas. The panel’s final report (PDF), which did not evaluate the large body of climate research, did quote a letter to the United Nations from 100 scientists (most of whom were not climatologists) arguing that “significant new peer-reviewed research has cast even more doubt on the hypothesis of dangerous human-caused global warming.” What’s more, the panel cited the “state of the [climate] science” as one reason to question new regulations of greenhouse gases. Others included higher operational costs on Texas energy companies, higher costs for the TCEQ to enforce new regulations, and the loss of jobs and revenues from the natural gas, coal, chemical, and other energy industries.

Like Perry, Shaw has repeatedly fought regulatory efforts by the EPA, the country’s top environmental cop. When in 2010 the EPA proposed tougher restrictions on ozone emissions, after studies showed that the pollutant wreaked more havoc on public health than previously thought, environmentalists cheered the decision. But Shaw joined Perry and the American Petroleum Institute in slamming the new rules, arguing that the ozone crackdown “provides the illusion of greater protectiveness, but with no regard for cost, in terms of dollars or in terms of the freedoms that Americans are accustomed to.”

When the EPA finalized its Cross-State Air Pollution Rule in July, Shaw blasted the agency in the pages of the Houston Chronicle for blindsiding state regulators, trying to kill jobs in Texas, and threatening the state’s energy security. To Shaw, CSAPR, which ordered 27 states to improve air quality by curbing pollution from power plants, was just another example of harmful overreach by zealous Washington bureaucrats. “Like so many of the EPA’s proposed rules—extreme tightening of ozone limits, global warming control schemes, attempts to nullify Texas’ very successful flexible permitting program—this rule seems not so much intended to improve the environment as to impose unnecessary, expensive federal controls on industry and increase the costs of energy to consumers,” he wrote.

And in an August 2010 letter (PDF) to EPA officials, Shaw and Texas Attorney General Greg Abbott bluntly rejected the agency’s request that Texas begin to account for greenhouse gases, a leading cause of climate change, in its permitting process. “We write to inform you that Texas has neither the authority nor the intention of interpreting, ignoring, or amending its laws in order to compel the permitting of greenhouse gas emissions,” the letter reads.