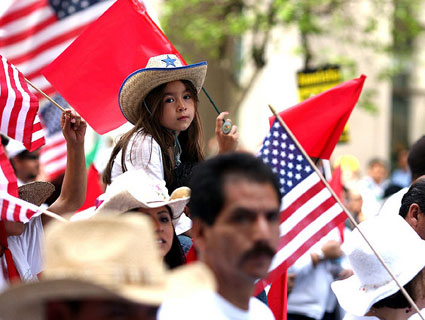 Massachussetts Governor Mitt Romney’s flip-flops on immigration are less dramatic than his switch from ardent pro-choicer to opposing abortion in almost all circumstances, but they might be more convoluted.

A pro-immigration reform group, America’s Voice, released a report Wednesday in advance of the GOP presidential debate tracing the Republican candidates’ evolution on immigration policy. Romney is all over the place.

As governor, Romney vetoed a state-level DREAM Act that would have granted in-state tuition to undocumented immigrant students and pushed for a larger role for local authorities in enforcing federal immigration laws. But he also stuck up for Bush’s comprehensive immigration reform bill in 2005, defending the president from charges of pursuing “amnesty.” In 2006, Romney said Republicans opposing Bush on immigration had “made a big mistake.”

Then, of course, Romney started competing with Senator John McCain, an immigration moderate, for the 2012 GOP nomination. The ex-governor tried to thread the needle between attacking the McCain-Kennedy immigration bill as “amnesty” and currying favor with the White House, which was trying to get a comprehensive immigration reform bill passed. Romney called McCain’s proposals “reasonable” in 2006, but by 2007 he was on “Meet The Press” trying to explain that although he supported granting a path to citizenship to undocumented immigrants. How that was somehow different from the “special pathway” McCain’s bill would have created is unclear.

Now Romney, who is suddenly facing an uphill battle against Texas Governor Rick Perry for the GOP nomination, has started running to Perry’s right on immigration. Speaking to Hispanic Republicans in Florida, Romney highlighted his veto of a state-level DREAM Act, drawing a contrast with Perry, who signed one in Texas. Romney also reiterated his support for an employer verification system and a “high tech fence” to “secure the border.” Perry recently restated his opposition to a border fence, saying that “if you build a 30-foot wall from El Paso to Brownsville, the 35-foot ladder business gets real good.”

That’s not to say that Romney doesn’t have his eye on the general election, and possibly even that 40 percent Latino vote threshold former Bush pollster Matthew Dowd said Republican candidates have to reach to win the White House—and judging by Obama’s drop in approval among Latinos, there might actually be an opening to exploit. During the last Republican debate, Romney proposed “stapling a green card” to the degrees of highly skilled immigrants. Perry, on the other hand, recently endorsed a path to citizenship exclusively for undocumented immigrants who serve in the military. Both GOP frontrunners are trying to grope for a sensible center-right on immigration in a party that no longer has room for one.