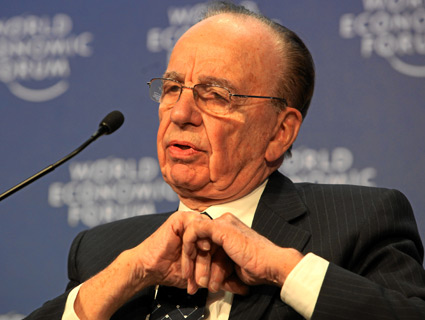 Rupert Murdoch’s reputation precedes him—but one thing he’s not well known for is his education reform advocacy. But that could soon change. Next month, Murdoch will make an unusual public appearance in San Francisco, delivering the keynote address at an education summit hosted by former Florida Gov. Jeb Bush, who has lately been crisscrossing the country promoting his own version of education reform.

The high-profile speech to a collection of conservative ed reformers, state legislators, and educators is just the latest step in Murdoch’s quiet march into the business of education, which has been somewhat eclipsed by the phone-hacking scandal besieging his media empire. (On Tuesday, word of Murdoch’s appearance at Bush’s conference came just hours after reports that News Corp. had agreed to pay more than $4 million to the family of a 13-year-old British murder victim, Milly Dowler, whose voicemail was hacked by reporters for Murdoch’s News of the World. ) But Murdoch has made it very clear that he views America’s public schools as a potential gold mine.

“In every other part of life, someone who woke up after a 50-year nap would not recognize the world around him…But not in education,” he remarked in May during a speech at the “e-G8 forum” that preceded the G8 summit in France. “Our schools remain the last holdout from the digital revolution.”

Last November, News Corp. dropped $360 million to buy Wireless Generation, a Brooklyn-based education technology company that provides software, assessment tools, and data services. “When it comes to K through 12 education, we see a $500 billion sector in the US alone that is waiting desperately to be transformed by big breakthroughs that extend the reach of great teaching,” Murdoch said at the time.

A few weeks before the deal, News Corp. had hired one of the nation’s most prominent education figures, Joel Klein, away from his job as New York City schools chancellor. As it happens, Klein was already familiar with Wireless Generation, which began working with the New York City school system during his tenure.

While Murdoch’s arrival to the education business is being cheered by Jeb Bush and other conservatives, the idea of the parent company of News of the World and Fox getting into the school biz hasn’t gone over well with the education establishment. Murdoch’s new venture has stirred controversy in New York, where this summer the state sought to enter into a $27 million contract with Wireless Generation to track student performance. Given Klein’s hiring, the deal prompted an outcry by teachers’ unions and other critics who saw the public school system becoming just another example of revolving-door politics and crony capitalism. (“They chose us because we’re good,” and not due to any connection to Klein, says Wireless Generation’s spokeswoman, Joan Lebow.)

In early August, New York teachers’ unions demanded the state rescind its plans to contract with Wireless Generation. “It is especially troubling that Wireless Generation will be tasked with creating a centralized database for personal student information even as its parent company, News Corporation, stands accused of engaging in illegal news-gathering tactics,” representatives from the state and New York City teachers’ unions wrote.

Wireless Generation had caused controversy even before Murdoch purchased the company. Last year, when New Jersey lost out on millions of federal education funding due to a screw-up on its grant application, the company landed at the center of the debacle. The state, after all, had reportedly paid the firm $500,000 to ensure the accuracy of its application, among other things.

News Corp.’s entrance into the education sector raises broader education policy questions, says University of Arizona education professor Kenneth Goodman. Having a multinational corporation in charge of assessing kids’ reading skills, he notes, shows that “decision making in education is so far removed from people who have anything to do with kids.” And like many educators, he is suspicious that Murdoch will bring his conservative ideology to his education ventures: “They’d like everything to be privatized.”

Already, Murdoch’s phone-hacking baggage is hurting his bottom line. In late August, New York rejected its plans to contract with Wireless Generation. The reason, according to the state’s comptroller: “vendor responsibility issues involving the parent company of Wireless Generation.”