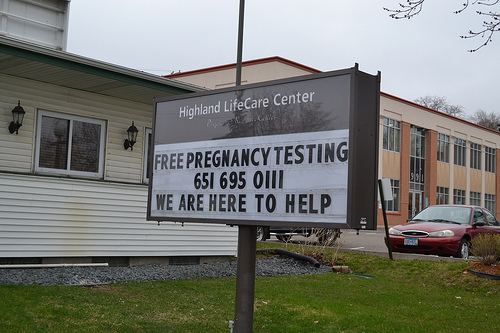 San Francisco may be the next city to attempt to force so-called “crisis pregnancy centers” to disclose the fact that they don’t actually offer abortion services. The point of a new ordinance, introduced last month by city Supervisor Malia Cohen, is to stop these largely religiously-affiliated clinics designed to deter women from having an abortion from luring in women with false claims about the services they offer.

Even though their staff may wear white lab coats and use ultrasound equipment, many of these clinics actually employ no medical professionals. They have also been found to provide medically inaccurate information in the interest of changing a woman’s mind about getting an abortion. Many of them advertise as if they do offer abortion services, or are located near actual abortion providers—which can be confusing for women seeking services. The ordinance doesn’t say that anti-abortion groups can’t set up CPCs—just that they need to be honest in their advertising and other public information about what they actually do.

The ordinance outlines why these facilities should be more clearly marked:

When a woman is misled into believing that a clinic offers services that it does not in fact offer, she loses time crucial to the decision whether to terminate a pregnancy. Under these same circumstances a client may also lose the option to choose a particular procedure, or to terminate the pregnancy at all.

The fact that CPCs do often mislead women has been pretty well documented. Jezebel published a personal account from one young woman last week that summed up the concerns very well. Or you can take a look at the website of San Francisco-based CPC First Resort, which features cartoons of doctors and a whole “Ask the Doctor” section. That same section contains medically inaccurate information about how they can determine whether or not a woman is going to miscarry so they might not need an abortion after all. And the whole website hides the fact that the clinic doesn’t actually provide abortions.

Earlier this year, New York City passed a similar law that would force CPCs to display signs about the type of services they offer. A judge struck down that law, however, deeming it “unconstitutionally vague.” The worry, according to the judge, was that because the New York law “relates to the provision of emergency contraception and abortion—among the most controversial issues in our public discourse—the risk of discriminatory enforcement is high.” The San Francisco version is different, in that it doesn’t force CPCs to put up any particular signs; it just asks that the information that they do put out is accurate. I would guess that anti-abortion groups would also contest San Francisco’s if it does pass, however.

Meanwhile, South Dakota passed a law this year that would force women seeking abortions to visit one of these centers, but a judge blocked it. The Argus-Leader reported on Monday that the state expects to spend as much as $4.15 million to defend the law in court. South Dakota readers: Behold your tax dollars at work!