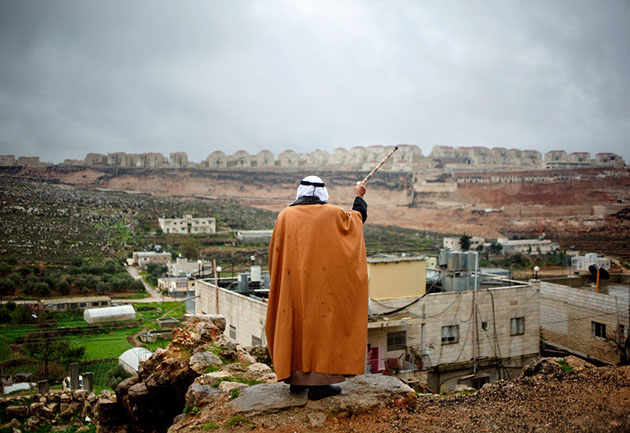 Yousef Manasra, 87, raises his cane in frustration as he looks at the Beitar Illit settlement on the hill above Wadi Fukin on December 30, 2009. In 1948, the Israeli army evacuated Manasra and the rest of Wadi Fukin as part of a border dispute during the first Arab-Israeli war.

Most days Yousef Manasra wakes to the sound of jackhammers. The incessant pounding drones on throughout the day and into the evening as workers clear nearby land for new homes in the Beitar Illit settlement.

For Manasra, 88, the jackhammers are a reminder of the tenuous situation facing his small town of Wadi Fukin, in the Palestinian territories.

“It’s a nightmare that’s come to us,” he said. “If there was an earthquake, that would be better than what they’re doing to us.”

Over the past five years (since I first reported from Wadi Fukin), Manasra said the situation in his town has deteriorated considerably. Beitar Illit has the highest birthrate of any settlement in the West Bank and currently houses more than 40,000 ultra-orthodox settlers. It has grown by more than 10,000 people since 2006, and planners say it’s expected to house 100,000 residents, dwarfing Wadi Fukin (population 1,200) and other nearby Palestinian towns. 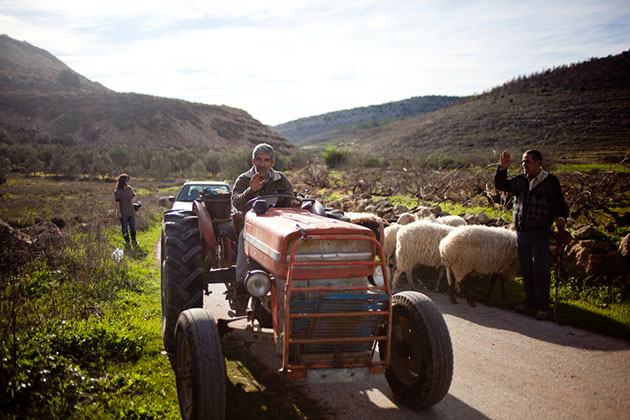 A farmer and sheepherder pass each other on one of the main roads in Wadi Fukin on January 2, 2010. The town, which is fed by several springs, used to be known as the breadbasket for the nearby city of Bethlehem.

It is often the men from Wadi Fukin who run the jackhammers and build the settlement’s multistory houses. Cheap Israeli produce has flooded the Palestinian markets, putting farmers in this verdant valley out of business and pushing them into construction jobs.

“At the end of the day people need money…and the only available source of income to be seen for Wadi Fukin and maybe many communities around it is work inside the settlements themselves—building these same settlements that suffocate them,” said Suhail Khalilieh, who heads the Settlements Monitoring Department at the Applied Research Institute-Jerusalem.

Back in 2006 residents feared their town would soon be surrounded by Israel’s separation wall, cutting them off from the rest of the West Bank. While the town is not surrounded yet, one important section of the wall has been built. A concrete barrier erected in the town of al-Khader now divides Wadi Fukin from the nearby city of Bethlehem, which residents rely on for food, school, and health care. 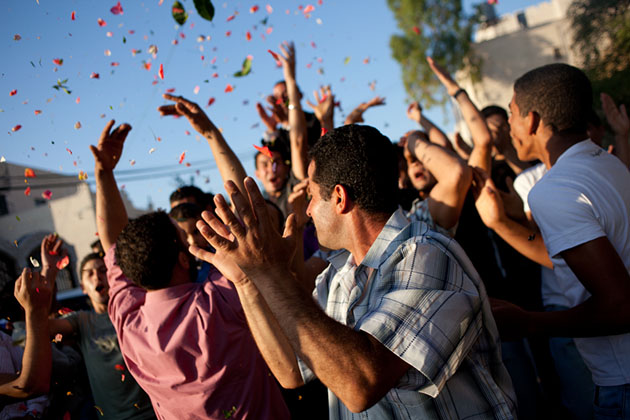 Men from the town of Wadi Fukin participate in a wedding celebration.

A mass exodus of the town’s young people also remains a constant fear. Five years ago Yousef Manasra said he worried the younger generation would grow tired of navigating the restrictions imposed by the occupation and move farther into the West Bank, leaving the town to slowly die off.

For Manasra, moving is unthinkable. He’s already seen the town die once. In 1953, Israeli soldiers dynamited Wadi Fukin as part of the ongoing border dispute that erupted after the 1948 Arab-Israeli war. He and the rest of the village lived in the nearby Dheisheh refugee camp until 1972, when they were finally allowed back. When they rebuilt Wadi Fukin, it would be the only time, as far as Palestinians can recall, that residents reconstructed a town destroyed in fighting associated with the 1948 war.

“If it were our choice, we’d die rather than leave again,” he said.

The same is not true for his grandson Adel Hroub, 27. Hroub said he would like to stay but will leave if he can find meaningful work elsewhere. He just graduated from al-Quds University with an English degree and dreams of working at a foreign embassy.

“With the life as it is now in Wadi Fukin, there is no future,” he said. 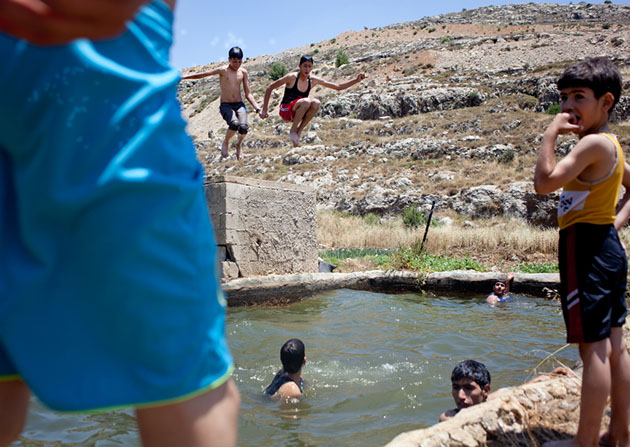 Young boys from the town of Wadi Fukin jump into an irrigation pool to cool off on June 2. Farmers in Wadi Fukin use the pools to store water from the natural springs that flow into the valley. 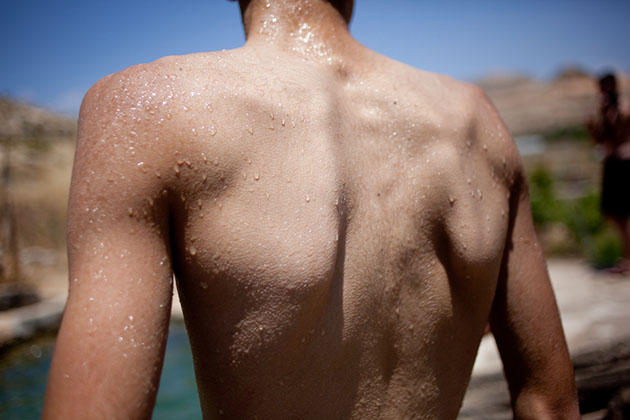 Sameh Manasra, 16, drips with water after swimming in one of Wadi Fukin’s irrigation pools on June 2. 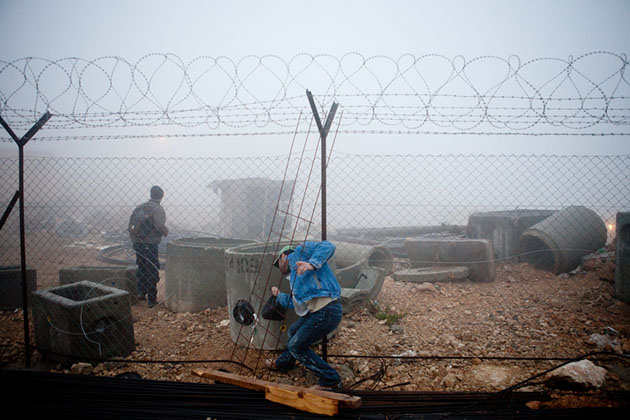 Two young men from the town of Wadi Fukin sneak through a fence on their way to work illegally in the Beitar Illit settlement on December 29, 2009. The Israeli occupation prevents residents in Wadi Fukin from earning their traditional living in agriculture, so most of the young men now make their living by working construction in nearby settlements or in Israel. 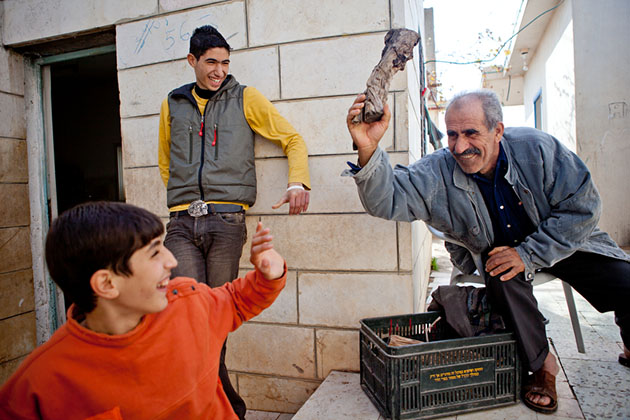 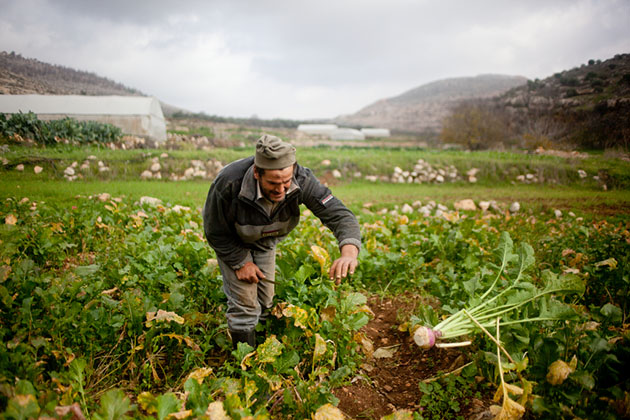 Maher Sukkar harvests turnips from his land in Wadi Fukin on December 29, 2009. Although farmers can’t make a living off farming, many still work the land to avoid having it confiscated. According to an old Ottoman law adopted by Israel, any piece of Palestinian land not continually worked for a certain period of time become’s Israeli state property. 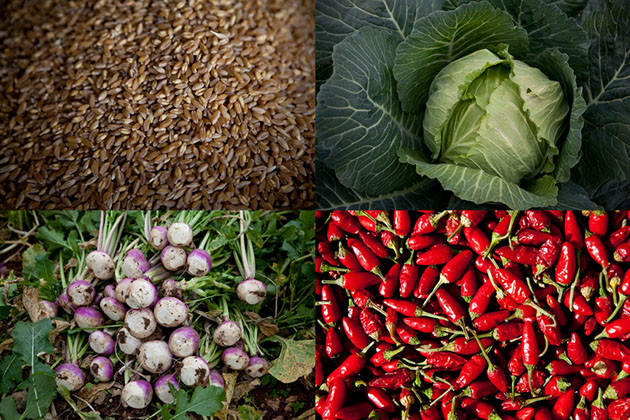 Since they can’t get their produce to market, most of the food grown in Wadi Fukin is eaten by the community. Some of the crops include wheat, cabbage, turnips, and chili. 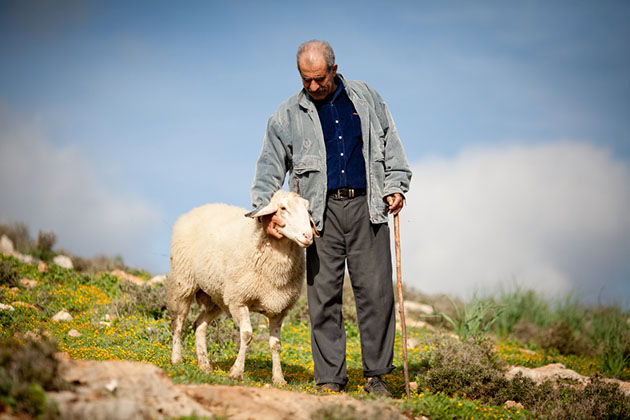 Ibrahim Manasra tends to one of his sheep while they graze above his house in Wadi Fukin on January 1, 2010. Manasra is part of the first generation in Wadi Fukin who could no longer make a living off the land. At one point he was forced to drive a cement truck in the Beitar Illit settlement to support his family. 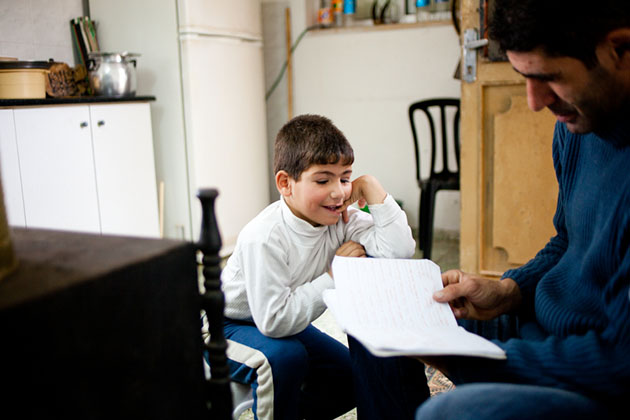 Wael Manasra, 34, helps his son Adel, 4, with his homework on January 1, 2010. Last year, Wael illegaly snuck into Israel to work on an Israeli housing development. While he was there, he fell off a set of scaffolding and knocked out his front teeth. Bloody and in shock, he had to spend the night hiding on a rooftop before he could sneak back into Palestine. Since his accident, he’s lost 30 pounds because he can’t eat solid foods. He’s currently trying to save enough money for a set of dentures. 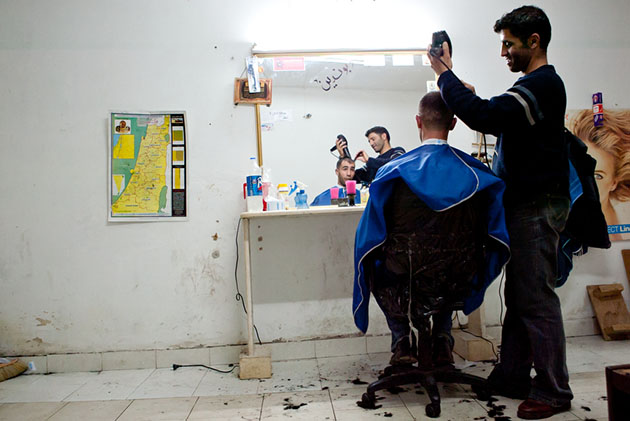 Wisam Manasra, 25, gets his hair cut by Nader Manasra on March 28, 2006. At the time Wisam wanted to attend a university and work as a journalist but feared it would be impossible with Israel’s impending separation wall. Instead, he left Wadi Fukin after marrying an American citizen he met online. He now lives in Providence, Rhode Island, and works the night shift at a bakery. 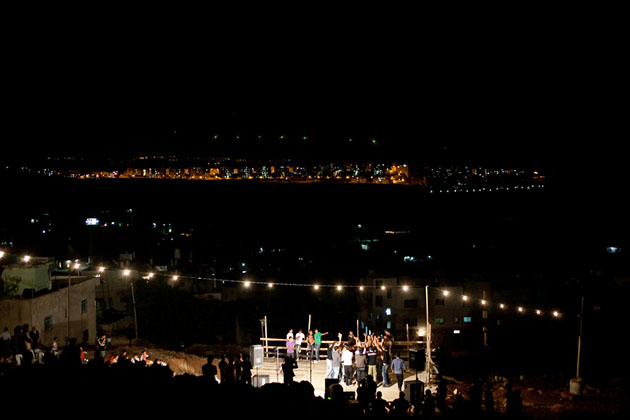 Men dance during a wedding celebration in Wadi Fukin on June 2. The lights from the nearby Israeli settlement of Beitar Illit can be seen in the distance. 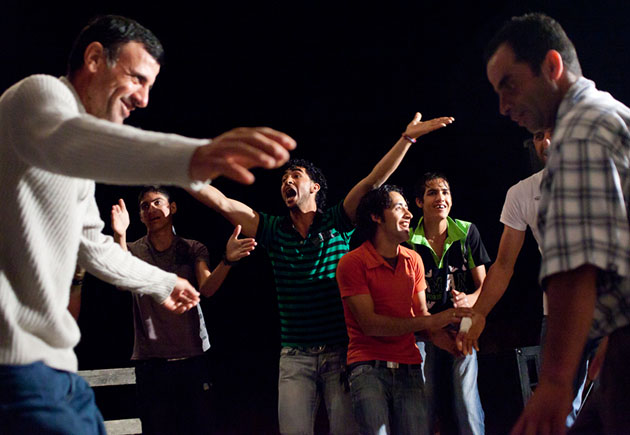 Men dance during a wedding celebration in Wadi Fukin. 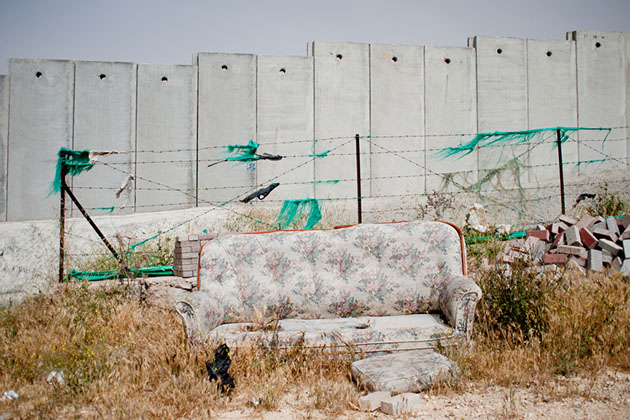 An abandoned couch sits in front of the Israeli separation wall near the town of al-Walaja on May 17. 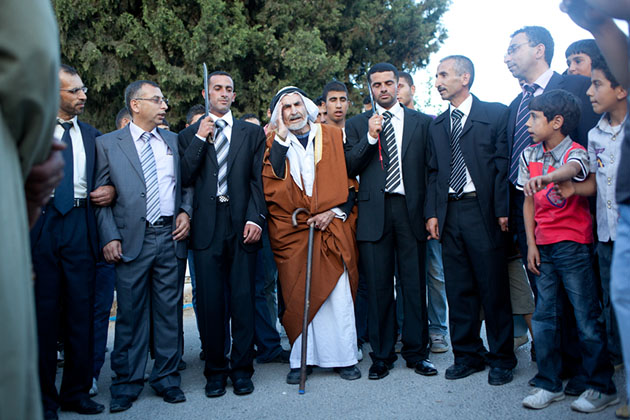 Brothers Basam Asaf (holding sword on left) and Jihad Asaf (with sword on right) participate in a joint wedding ceremony in Wadi Fukin. The brothers had just married a set of sisters from a nearby village. 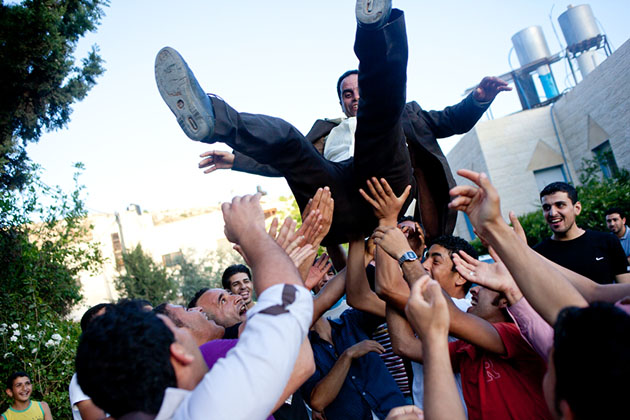 Mahmoud Asaf gets thrown in the air during a wedding celebration in Wadi Fukin for his brothers, who had just married a set of sisters from a nearby village. 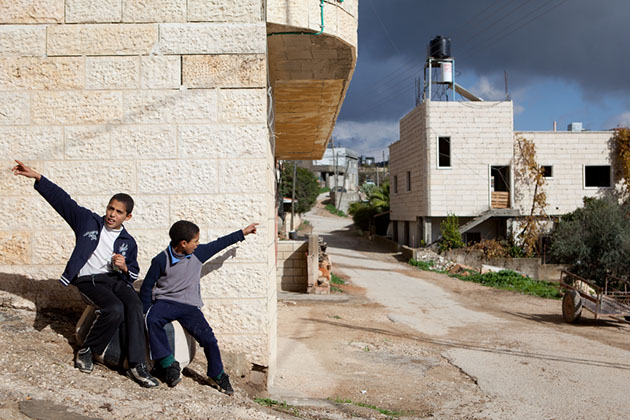 Mohammed Mizher, left, and Mohammed Fahri, both 11, point out where they live in Wadi Fukin on December 31, 2009.