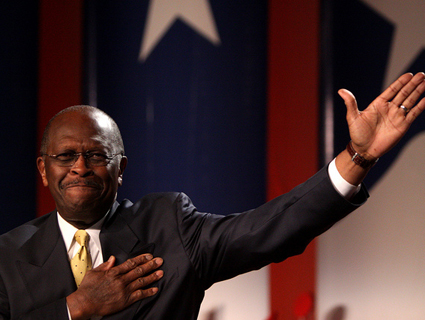 CIS, which is run by Puerto Rican nationalist Mark Krikorian, is a group that’s known for advocating a hardline policy on immigration. The group’s favorite plan is “attrition through enforcement,” which means making life for unauthorized immigrants as miserable as possible so they’ll leave. But even CIS was apparently shocked by Cain’s call for a border fence that would electrocute people who attempted to cross.

That’s right, he wants to make crossing the border illegally the lethal equivalent of a national Milgram shock experiment, one in which punishment is immediately meted out without benefit of any arrest, charge, or trail.

Whatever virtues Mr. Cain has a business executive, it is clear that he is almost wholly devoid of substantive knowledge or thought about any of the matters he had every right to be expected to be asked about when he put himself forward as a presidential candidate.

Mr. Cain’s thoughtless remarks will doubtless be put forward as an illustration of the “fact” that anti-immigrant feeling permeates the highest levels of the Republican Party – their presidential candidates.

It illustrates no such thing, of course. It is solely the witless remark of a man who has no real substantive or experiential reason to be part of any platform for presidential candidates. But those of us who favor legal immigration and enforcement will pay nonetheless.

So Renshon is mostly worried that the buzz created by Cain’s high-voltage rhetoric—even if delivered um, “jokingly“—will discredit the immigration restrictionist cause. A note to CIS: That anonymous study you published earlier this year affirming the existence of so-called “terror babies?” It’s doing pretty much the same thing.

UPDATE: Herman Cain is back on the fence:

Initially Cain apologied when told his remarks had upset some in the state. “Mea culpa, mea culpa, mea culpa,” he said, using the Latin formula for expressing contrition. But when a reporter challenged his description of his comments, saying he didn’t seem to be telling a joke, the retired pizza executive acknowledged: “You’re right.” He said he still believes in the need for a border fence “and it might be electrified.”

Cain was just kidding about just kidding. He really does think electrocuting people who try to cross the border between the U.S. and Mexico is a good idea.