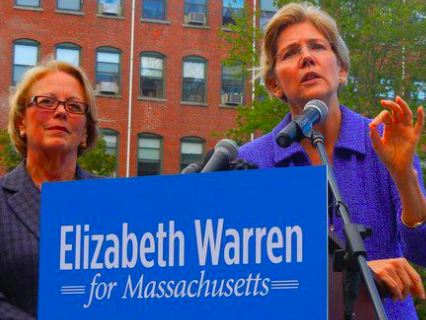 Elizabeth Warren isn’t backing down from her support for the Occupy Wall Street movement, even as conservatives look to turn the nationwide protests movement into an electoral wedge issue. Speaking to reporters after an event in Framingham, Massachusetts on Tuesday, the Senate candidate downplayed her comments to the Daily Beast, suggesting that she had created the movement—but pointedly embraced their anti-Wall Street message and cast them as kindred spirits against a “rigged” economic system.

The controversy began when the Daily Beast‘s Samuel Jacobs published a profile of the Consumer Financial Protection Bureau architect, in which  Warren was quoted saying of Occupy Wall Street: “I created much of the intellectual foundation for what they do.” Conservatives pounced—the National Republican Senatorial Committee released a statement noting that “the Boston Police Department was recently forced to arrest at least 141 of her Occupy acolytes in Boston the other day after they threatened to tie up traffic downtown and refused to abide by their protest permit limits.” The Boston Globe moved Warren’s comments closer to Al Gore-and-the-Internet territory, headlining its piece, “Warren claims credit for Occupy Wall St. protests.”

So after an event in Framingham on Tuesday, Warren tried to clear things up a bit. She stood by her suggestion that her anti-Wall Street work had influenced the movement, while emphasizing that she believed Occupy Wall Street was a separate grassroots movement. Here’s what she said when informed by a local reporter that her comments had not gone over well at Occupy Boston:

Alright, it is a grassroots movement and I am very pleased that they took responsibility for their movement and they are growing it the way they want to grow it. I’m gonna have to actually go back and read what I said. I had a long conversation with someone about the Occupy Wall Street movement. I said, I think, I’ve been protesting Wall Street for a very long time. And that I understand the frustration, I share their frustration, with what’s going, that right now Washington is wired to work well for those on Wall Street who can hire lobbyists and lawyers and it doesn’t work very well for the rest of us. That’s what I’m talking about, that’s why I’m running for office, and that’s it.

Asked more directly about the charges made by the NRSC, Warren sought to knock down the idae that she thought of herself as the movement’s creator: “There’s not a question of is there enough credit to go around,” she said. “I have been protesting Wall Street for a very long time. Occupy Wall Street is an organic movement, it expresses enormous frustration and gives a great faith all across the country for people to talk about what’s broken. So I am glad that that conversation is going forward and that it’s going forward in an organic way.”

Warren is expected to win the Democratic nomination, which won’t be formally decided until next September. A survey by Public Policy Polling last month, just after she entered the race, gave Warren a two point edge over Brown. But the race is expected to be a battle. Warren has already raised $3 million in an abbreviated first quarter of fundraising, and Brown has $10.5 million cash on hand—much of it from Wall Street.